This morning, a friend and I met to catch up at Starbucks. While we were talking a lady sat down at the table next to ours and was reading The Shack by William P. Young. Having read snippets myself as well as many reviews (one of the more balanced and substantive may be found here), I was interested in understanding how she was processing the story. 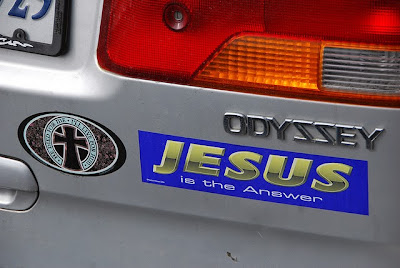 The lady told me she is enjoying the book and liked how it "focused on relationship. It doesn't over-complicate our approach to God and make it all about religion. I think that people try to make things too hard, when it's all about relationship. Just like any other relationship, it depends on how you view the other person; if you spend time with them. Religion is about all those things you have to do, the stuff you have to obey."

Now, this may sound pretty traditionally Christian, but I had a couple of red flags go up in that statement. Upon asking further, I found out she attends a "pretty laid back church", more contemporary than its denominational roots. She also said that the church was taking a purpose-driven model in its approach. None of that is a concern in and of itself. I know that there can be really strong churches that are purpose driven. However, it seemed that all I was getting in my conversation with her were these 21st century Christian catchphrases. So I wanted to dig a little deeper and see if she understood any of this.

"So, how do you understand what Christianity is?" I asked.

"Well, it's like I said at the beginning. It's about having a relationship. Like in this book where the character of the Holy Spirit says 'It seems you view your life as a pyramid with God at the top. I don't want to be at the top of the pyramid, I want to be in the center. I don't want you to focus on Me one or two days out of the week, then have all your other things, I want to be in the center of everything you do.' So, it’s a relationship where God it a part of everything, not just a side thing."

I pressed again, "But WHY do you need a relationship? Why is that important?"

"Well," she answered "I... I... I'm really not good at explaining things like this."
And that was my sneaking suspicion. You see, in all the talk of closeness and relationship, there was no mention of sin or a fallen nature. She didn't have a concept of someone who has been rescued from a destiny of judgment.

I think that as Christians, we need to have sound reasons for why we believe what we believe. That includes reasons for the necessity of this relationship with Jesus. If we're going to have a relationship with someone, we'd better get to know who they are and what they did as much as we can! Unfortunately, sound theology is being supplanted by quick taglines and Christianese.

We find the subject of sin and a destiny in hell an uncomfortable idea. A lot of churches today would rather just talk about having a relationship with God but leave out the sinner part of the equation, since it makes people uncomfortable and may drive "seekers" away. My position is that true seekers are looking for answers and not just feel-good platitudes.

Our relationship with God is not the same as any other relationship – it is unique. We are sinners saved by His payment on the cross. The message of the Gospel cannot be preached without this vital point of information, but it was wholly absent in my conversation with this woman.

The reason I point this out is because many people we run into through the course of our lives may look Christian and say all the right things, but they may be missing a big piece of the puzzle. I’m still not sure if this lady had a saving relationship with Jesus. She agreed with all I brought up on how Christianity is the only faith that effectively answers the sin problem and that Jesus did pay the penalty for sin, but how much she holds of that is still a bit of a mystery.

So the next time you meet someone who you think is a Christian, don’t be afraid to engage them further. They may very well understand that becoming a follower of Jesus is just that - pledging your life to Him because of what He did for us. Or they may just know the lingo, or be simply unclear on the whole matter. Whatever the case, being clear yourself and helping others see things clearly is a good start in correcting a church that increasing is infected with easy-believism.