There's an old joke about a professor walking at his University and sees a young Christian from a small town reading the book of Exodus. "Praise God!" the youth exclaims, "What a miracle! God parted the Red Sea so Israel could pass through!" The prof decides to dispel the backwards beliefs of the yokel, telling him, "I think you're misinformed. Scholars have concluded that what you read as the Red Sea is really the Sea of Reeds. That area is really only covered buy a few inches of water, so the Red Sea wasn't really parted. Education has debunked that miracle, so there's nothing there to shout praises for."

The student sheepishly thanked the teacher for enlightening him to this new-found knowledge. Feeling a bit cocky as he began to walk away, the professor was surprised to suddenly hear the student exclaiming the greatness of God and his miracles all the louder. Turning on a dime, the lecturer quickly returned to the student and snapped "Didn't you believe what I said?"

"Yes sir, I did." answered the lad. "But then I kept reading and it says here that God drowned all of Pharaoh's army in those few inches of water. What a mighty miracle of God!"


Two Types of Charges against Scripture

Certainly one of the more persistent objections Christians hear to their faith is the Bible is untrustworthy. I've heard this charge raised in many different venues. Sometimes Christians will rush in to defend the Bible with stats and quotes, but this would be a mistake. As I've engaged skeptics in colleges and universities who question the veracity of the Bible, their objections are not monolithic. Different people have different objections to the Scriptures, and it is important that in conversation you address the specific objection in the objector's mind.

The first thing that I ask someone who claims the Bile can't be trusted is "in what way can't it be trusted? Can you be more specific?" This helps shape the conversation going forward so I know where to place my emphasis. Objections to the Bible come in one of two main categories: either doubting the accuracy of the text or doubting the fidelity of the accounts. Each category will need to be answered very differently. Let's take a look at both so you can more easily identify them.


Accuracy of the Text

When asked to be more specific, most people who make the claim that the Bible is untrustworthy will respond with a more specific objection. You may hear objections like these:
All of the examples above fall into the first major category, questioning the accuracy of the text. These kinds of objections may be answered by pointing to methods of textual criticism that show why scholars have a very high level of confidence that we can know what the original scriptures said. I've written on an easy-to-remember way to show that here. (The "translated too many times" objection is based from ignorance.) The accuracy of the New Testament text really isn't an issue for scholars, and the Dead Sea scrolls have demonstrated that the Old Testament text has remained reliably copied for thousands of years.


Fidelity of the Accounts

But textual accuracy isn't the only type of objection one may hear. You may also be confronted with objections like:
These charges are not questioning whether we have the right text, but whether the text accurately records the accounts as they happened. Answering charges against the fidelity of the scriptures requires a different approach. You may need to discuss how the Gospel accounts had to meet a high level of expectation as history or how archaeology has confirmed many of the biblical accounts. You may need to spend some time discussing just what they mean by "contradiction" and how different contradiction claims fail. You may even need to talk about why the Gospels offer a ring of truth as eyewitness accounts. Wherever your discussion leads, it will be a very different one than with someone who questions the accuracy of the text itself.

When defending your faith, asking clarifying questions is crucially important. Sometimes when challenged, people don't even have a focused objection in mind. They're just parroting back something they've heard. Challenging them to be more specific brings this out and it will tell you just how seriously they are taking their own claims. But if they do, you now have a better idea of how to approach the discussion and whether or not they're earnest in listening to a response.
Posted by Lenny Esposito at 12:09 PM No comments:
Labels: apologetics, reliability of the Bible, skepticism, textual criticism, witnessing

Questions for Skeptics: Why Aren't You More Skeptical of Your Morality? (Video) 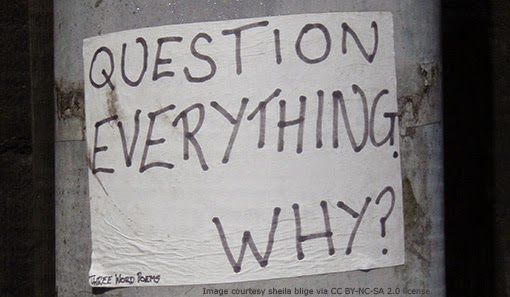 A lot of skeptics object to the God of the Bible as being cruel, intolerant, genocidal, or worse. All of these claims hinge on a specific moral position, though. How does the skeptic know that he or she has the appropriate moral high ground? From where does their morality stem?

In this short video, Lenny discusses the problem of moral grounding and asks why these skeptics don't question their own moral position in the same way they question God's.