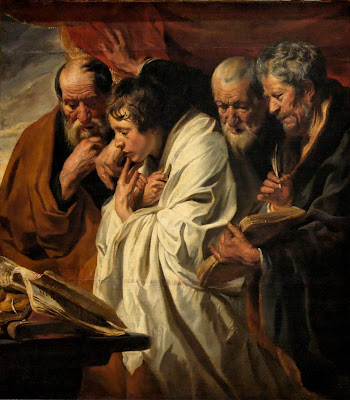 Much gets made by skeptics these days about the supposed contradictory accounts of Jesus's life in the four Gospels.  They ask about the timing of the events (how could it have been three days and three nights), how many women were at the tomb, and other facts that seems to be reported differently by the Gospel authors. Sometimes, the errors are an example of expecting robot reporting or snubbing style to force meaning.

A couple of years ago, I was able to sit down with Dr. Michael Licona and discuss how the accounts of Jesus's life differ and what that actually means. You can view the entire interview on YouTube, but the Baptist Press gave a nice summation of it in their publication. One portion I'd like to focus on particularly is Dr. Licona's work in comparing the Gospel accounts to other ancient biography that was written at the same time:


In an interview with Lenny Esposito of Come Reason Ministries at the Evangelical Theological Society's annual meeting, Licona, a former apologetics coordinator at the North American Mission Board, said it had not necessarily ever bothered him that some facts reported in the Gospels appeared to be contradictions.

"I believe in biblical inerrancy, but I also realize that biblical inerrancy is not one of the fundamental doctrines of Christianity. The resurrection is," Licona told Esposito. "So if Jesus rose from the dead, Christianity is still true even if it turned out that some things in the Bible weren't. So it didn't really bother me a whole lot even if some contradictions existed. But it did bother a lot of Christians."

Licona recalled a student in a class he was teaching at Southern Evangelical Seminary who, with tears forming in her eyes, wanted to know whether there were indeed contradictions. A majority of the class, he said, raised their hands to indicate they were troubled by apparent contradictions. Then he realized it was something he should address.

As he studied the Gospel accounts of Matthew, Mark, Luke and John, Licona began keeping a document of the differences he noticed. The document grew to 50 pages. He then read ancient biographies written around the time of Jesus because New Testament scholars often regard the Gospels as ancient biographies, he said.

Licona focused on Plutarch's biographies. The assassination of Julius Caesar, he noted, is told in five different biographies by Plutarch.

"So you have the same biographer telling the same story five different times. By noticing how Plutarch tells the story of Caesar's assassination differently, we can notice the kinds of biographical liberties that Plutarch took, and he's writing around the same time that some of the Gospels are being written and in the same language—Greek—to boot," Licona told Esposito.

"As I started to note some of these liberties that he took, I immediately started recognizing these are the same liberties that I noticed that the evangelists take—Matthew, Mark, Luke and John," Licona said.1

There's a difference between a contradiction and a stylistic change meant to emphasize one aspect of an event in one account, while another account may stress different aspects of the same event. As I've stated, these differences actually work in favor of the validity of the eyewitness accounts.