A Big, Dangerous Universe is NOT Evidence Against God 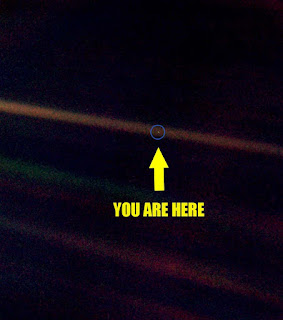 The recent discovery of the seven planets orbiting the TRAPPIST star has a lot of folks talking. As I wrote last week, even though they're labeled as "earth-like" and reside in what astronomers call the habitable zone, the idea that life could exist on them is remote in the extreme. The fact that our planet is so uniquely situated in just the right spot with just the right conditions around just the right kind of star provides strong evidence for design, like finding a cabin in the middle of an unpopulated forest.

Of course, others won't admit that our world shows marks of design. Some even offer the uniqueness of the earth as evidence against its design. I had one such interaction on Facebook where a gentleman names Simeon responded to my article by saying, "The rarity of habitable planets in the universe is actually evidence for a universe not designed for human habitation." After some interaction, he went on to claim "An all-powerful deity would not need to create an entire universe to support a single planet. He could have just made a single flat Earth with a dome over it, like some of the ancients believed." He finally summarized his position by writing "I think you are demonstrably wrong that the entire universe, as is, is required to support a single life-bearing planet. There is no way for planets around a distant star to have any bearing on Earth's habitability."


What Does it Take to Make a Biosphere?

I don't know if Simeon holds is a theist or not; we never discussed that issue. However, I've met many atheists who argue along similar lines, holding the vastness of space as evidence against a universe created to sustain human life. Couldn't God create any old kind of universe he wanted? Why would he need to make the universe so big just for one "pale blue dot" as Carl Sagan put it?

I think there's hubris in assuming that God can just create some kind of terrarium that holds the Earth but doesn't impact our biology and our experience. I remember being particularly intrigued at an extensive experiment to try and create a self-supporting environment that mimics the earth's in the 1980s. A group of scientists and investors built a large, airtight facility in the Arizona desert called Biosphere 2. Within it, they created a wetlands area, a desert, a rainforest, a savannah, and an "ocean" and then populated it with plants, insects, and animals. The goal was to create a mini-self-sustaining environment where people could live. If it worked here, it may have been possible to build a similar structure on another planet, making human habitation possible.

I loved the idea of biosphere 2. Unfortunately, creating a self-sustaining habitat on a smaller scale than the earth itself proved to be incredibly difficult. The New York Times reported that the results of a two year experiment in sustained living were a disaster: "The would-be Eden became a nightmare, its atmosphere gone sour, its sea acidic, its crops failing, and many of its species dying off. Among the survivors are crazy ants, millions of them."1 The paper reported how the facility was then sold to Columbia University who used it to model environmental catastrophes, instead of running tests on how to create sustainable environments.

My point here is simple. It's easy to claim "God could have just made a smaller system" but that claim has no evidence behind it. Dr. Hugh Ross in his new book Improbable Planet discusses many of the factors of our universe that had to be just right in order for a livable earth to exist, using as one example its massiveness. He writes:


If the universe contained slightly lower mass density of protons and neutrons, then nuclear fusion in stellar furnaces would have yielded no elements as heavy as carbon or heavier; if a slightly greater mass density, then star burning would have yielded only elements as heavy as iron or heavier. Either way, the universe would have lacked the elements most critical for our planet and its life—carbon, nitrogen, oxygen, phosphorus, and more. For life to be possible, the universe must be no more or less massive than it is.2

The fact that the universe, as massive as it is, still proves to be delicately set up for life on earth is a fact that hasn't escaped even secular scientists. Physicist Paul Davies, when he won his Templeton Prize, confidently proclaimed:


You might be tempted to suppose that any old rag-bag of laws would produce a complex universe of some sort, with attendant inhabitants convinced of their own specialness. Not so. It turns out that randomly-selected laws lead almost inevitably either to unrelieved chaos or boring and uneventful simplicity. Our own universe is poised exquisitely between these unpalatable alternatives.3

So, no, God couldn't have just made it smaller. Even if we discover there are no other truly habitable planets in any of the billions star systems across the billions of galaxies we know exist, it still wouldn't prove the universe wasn't designed for life. The interplay and complexity of the created world is a marvel to behold, and it clearly points to a Designer.