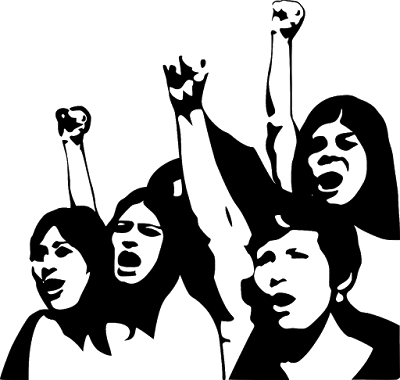 Today is marked as International Women's Day, described as "a global day celebrating the social, economic, cultural and political achievements of women. The day also marks a call to action for accelerating gender parity."1 The Women's March, among other progressive women's rights groups, decided to mark the day by creating "A Day without a Woman" campaign, instructing women to:
As a heterosexual white male living in the 21st century, I definitely want to highlight the crucial contributions women have made to our society. But I need some help in understanding just how to go about doing this. Lest I be accused of "mansplaining" or bias because of my sex, I want to ask my progressive friends to help me make better sense of this day and just what it is I'm recognizing.


Question 1: How Do We Mark Achievements Today?

As noted above, this date is set aside to celebrate "the social, economic, cultural and political achievements of women," yet women are being instructed to take the day off from labor—to go on strike. Fox News reports that "Several schools in at least four states were closed Wednesday so teachers can participate in ‘A Day Without a Woman' strike in which organizers are urging female workers to stay home."2How does this celebrate achievement? What happens to the female students who are supposed to be taught today? Does losing one day's instruction give them an advantage?


Question 2: How Do We Accelerate Economic Gender Parity?

Perhaps the strike is meant to accelerate gender parity. After all, the day is to be marked with calls to action. Does the fact that these schools closed mean the school districts need to hire more men so the ratio of genders is equal? Should we put quotas in place to ensure parity? What about other jobs where men are in the vast majority, like sanitation engineers or coal miners? Business insider lists these as two of the fifteen most deadly occupations with fatalities per 100,000 workers at 22.8 and 38.9 respectively.3 Christina Hoff Sommers documents how in the top ten highest paying college majors, men overwhelmingly outnumber women in all but one while in the ten least remunerative majors women outnumber the men in all but one. So, how do we accelerate gender parity economically here?


Question 3: How Do We Accelerate Cultural Gender Parity?

Perhaps economic parity isn't the only kind of parity we should strive for. Perhaps we can recognize that women as women offer unique and worthwhile contributions to our society that cannot be measured (or are undervalued) economically. But this seems to get sticky pretty fast. Can I say that women as a gender have a unique view on society and its problems? When the city of Los Angeles was in danger of having an all-male city council, former councilwoman Laura Chick decried the possibility, saying "Shame, shame. Absolutely it makes a difference. Our brains are different. We have different perspectives.... There's something terribly wrong with this."4

But how can this be true if a family requires two loving adults, no matter what their gender? Progressives have been telling me for a long time that children don't need women as mothers, they simply need loving individuals. Gender doesn't matter at all. To create a situation where children are intentionally denied the opportunity for a mother is so inconsequential that it shouldn't even be up for discussion. It certainly shouldn't be considered as a factor when adopting, as Catholic Charites were told, forcing them to shut down their adoption services in Massachusetts.


Question 4: What do You Mean by Woman?

Perhaps the fact that women bear children and are responsible for the lion's share of rearing them is a point to be underscored. But that would mean that the very concept of being a woman is rooted in biology. But according to my progressive friends, that isn't true at all. They say the very idea of gender is simply a social construct. All that is required to be a woman is to identify as a woman. Is that right? But that means I can be celebrated if I choose to identify as a woman today.

The big question in all this is how do we celebrate the achievements of women and rally to gain parity for women when the concept of what a woman is isn't defined? This is probably where I need the most help, as I can't make sense of it at all. If the very definition of what constitutes a woman is up for grabs, then what happens to those gender parity issues? I mean, there are those who deeply identify as football fans or basketball fans. I'm in the minority as a hockey fan. Should I seek a day for celebration of achievement and a call to parity since hockey fans are so underrepresented in society?

I would really love to celebrate women. However, in today's world with all the different messaging going on, I can't figure out just who it is we're celebrating or what kind of achievements qualify to be celebrated. If anyone can help me out, I'd be really appreciative.