How Did the Early Christians Influence Their Culture? 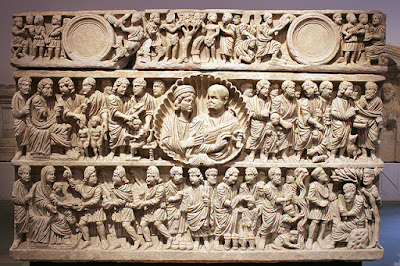 Christians are wondering how to deal with the aftermath of the Supreme Court ruling forcing all fifty states to recognize homosexual unions as marriage. The decision was lauded by those on the left as the last word on the question. Corporations changed their social media icons to include the homosexual rainbow colors. Government agencies like the Department of Education and the White House showed their unabridged support for the decision. Many people saw themselves ostracized or compared to bigots or ISIS because of their Christian views, even from friends and family members.

The fallout from this court case clearly shows that Christianity is now an outsider faith. For those in the West, it is a position Christians hadn't experienced since prior to Constantine's ascension in Rome. We aren't used to such a position, but we can look to the actions of those who lived in even greater peril for to understand how to hold fast to our faith and still significantly impact a pagan society.


Learning from the Early Christians

The early church was also an outsider faith, viewed with suspicion and denounced in its first two hundred years, too. But even with life-threatening persecution, the early church not only grew, but changed minds and hearts. Christianity's critics originally condemned the faith as a dangerous superstition causing sedition. Pliny wrote to Emperor Trajan in AD 112 discussing the Christian problem, reporting "whatever the nature of their creed, stubbornness and inflexible obstinacy surely deserve to be punished."1

But near the end of the century, views of Christianity began to change. Galen of Pergamon was an influential Roman physician and philosopher. He described Christianity not as a superstition, but as a philosophy. He explains:


Most people are unable to follow any demonstrative argument consecutively; hence they need parables, and benefit from them just as we now see the people called Christians drawing their faith from parables and miracles, and yet sometimes acting in the same way as those who practice philosophy. For their contempt of death and of its sequel is patent to us every day, and likewise their restraint in cohabitation. For they include not only men but also women refrain from cohabitating all through their lives; and they also number individuals who, in self-discipline and self-control in matters of food and drink, and in their keen pursuit of justice, have attained a pitch not inferior to that of genuine philosophers. 2

According to Robert Wilken, such a characterization is significant. By speaking of Christianity as a philosophy, he gave the faith legitimacy not for regarding abstract ideas, but also of a guiding force for living. Wilken writes, "Philosophy in Galen's day had become less a way of thinking than a way of living. Although philosophers were the inheritors of intellectual traditions that dealt with great metaphysical issues… they had gone into the streets of the cities to address the populace and to offer men and women advice on how to live."3


Living Out Your Values

When we read Galen's account of Christians, we see that it is the impact of Christianity on the changed lives of the Christians. They no longer would cohabit, they would exercise self-discipline and self-control, and they sought justice for the wrongdoings they saw in their day. Wilken himself identifies this as the significant factor in seeing Christianity more positively. "What led him to call it a philosophy was the success Christians had in leading men and women to a life of virtue."4

Christians today need to follow the model of these early believers. We need to begin by exercising our self-discipline and self-control in our own lives. That's a difficult task. We must make hard judgments in our entertainment choices. We must respect marriage and hold those in our churches to the high standard that the Bible lays out for it. As Christians we should be different from the society and it should show.

It is the integrity of the early Christians in their personal lives that gave their arguments a gravity they wouldn't otherwise have. While I understand the outrage so many believers have shown for the Obergefell decision, our first step in making a difference in our society is to make a difference in our own lives. Perhaps then our arguments may become more persuasive with our critics.