A. N. Sherwin-White on Jesus as Historical Figure 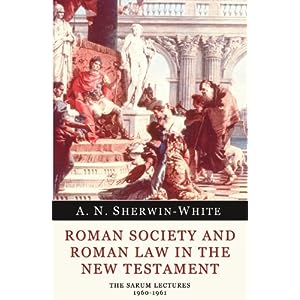 Oxford historian A.N. Sherwin-White was a well-recognized scholar in the history of ancient Rome. He was president of the Society for Promotion of Roman Studies and was a fellow of the British Academy. Dr. Sherwin-White knew ancient history as well as anyone. He also knew myth, how to separate myth from history, and what made good grounds for judging historical aspects of ancient sources. Here, he comments on the comparative historical support for the life of Jesus of Nazareth and the life of Tiberius Caesar:


It is astonishing that while Graeco-Roman historians have been growing in confidence, the twentieth-century study of the Gospel narratives, starting from no less promising material, has taken so gloomy a turn in the development of form-criticism that the more advanced exponents of it apparently maintain—so far as an amateur can understand the matter—that the historical Christ is unknowable and the history of his mission cannot be written. This seems very curious when one compares the case for the best-known contemporary of Christ, who like Christ is a well-documented figure—Tiberius Caesar. The story of his reign is known from four sources, the Annals of Tacitus and the biography of Suetonius, written some eighty or ninety years later, the brief contemporary record of Velleius Paterculus, and the third-century history of Cassius Dio. These disagree amongst themselves in the wildest possible fashion, both in major matters of political action or motive and in specific details of minor events. Everyone would admit that Tacitus is the best of all the sources, and yet no serious modern historian would accept at face value the majority of the statements of Tacitus about the motives of Tiberius.' But this does not prevent the belief that the material of Tacitus can be used to write a history of Tiberius. The divergences between the synoptic gospels, or between them and the Fourth Gospel, are no worse than the contradictions in the Tiberius material."