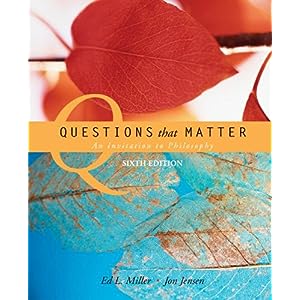 In this series of blog posts, I'm presenting my list of "Top Ten Neglected Books for Apologists." These are titles that don’t appear too often on recommended apologetics resources, but they are books that I’ve personally found extremely helpful in my development as one who seeks to competently defend the faith. Check out our previous posts here.

William Lane Craig has said that the study of philosophy is a key component to developing a strong apologetic.1 However, such a broad subject with so much history and interpretation can leave the student at a loss as to where to start. My next book recommendation was my first real introduction to philosophy, and it is excellent. Ed L. Miller's Questions That Matter: An Invitation to Philosophy is actually constructed as a textbook for a college level philosophy 101 course. However, Miller's inviting style, along with the various definitions highlights and reading excerpts from pivotal works in the history of philosophy make this a great way for anyone to become familiar with the major players and key concepts that the discipline has produced.

The thing I like most about the text is how even-handed Miller is on what can be very divisive issues. Miller, who holds a PhD. in philosophy from USC and a Doctorate of Theology from the University of Basel, Switzerland, is a member of the Society of Christian Philosophers. One would never know where his affiliations lie, however, as he is presents each concept and it various aspects with cool, clear neutrality. The great balance between an accurate, scholarly explanation of each philosophical concept and a friendly, easy-to-understand style is clearly a remarkable achievement.

Because Questions That Matter is a textbook, it can be pricy. Amazon lists the title for nearly $100. However, it is widely used in intro to Philosophy courses, so picking up a used fourth or fifth edition will save you a lot of money. There is a Kindle version out now, too.

1.
Craig writes, "If you want to do apologetics effectively, you need to be trained in analytic philosophy. And I say this even if your area of specialization is not philosophical apologetics." From "Advice to Christian Apologists" at http://www.reasonablefaith.org/site/News2?page=NewsArticle&id=5341
Posted by Lenny Esposito at 9:09 AM
Labels: apologetics, books, philosophy, resources, teaching, Top Ten Neglected Books for Apologists