80% of the World's Poor Better Because of Free Enterprise

As Christians, what should our attitude be toward economics? Should our religion inform our economic model or are those two areas distinct? I believe that our Christianity should inform our entire understanding of how we live. Obviously, economic systems like capitalism, socialism, and communism have a moral component because they affect the common man. If unbridled capitalism causes the many to remain poor at the expense of a few who become super wealthy, then it may be that such a system is wrong. If, however, communism offers more suffering by knocking down any one who seeks to better him or herself, then that model is antithetical to the Christian worldview. 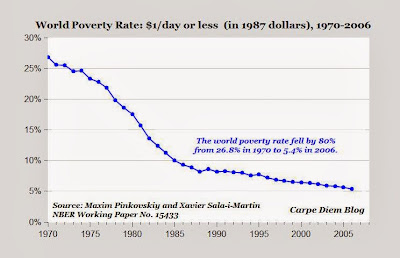 The reason I bring this up is not because of some partisan squabble within the United States. I try to keep this blog focused on issues of worldview, not partisan politics. This topic is larger than any one country, and Mark J. Perry, professor of economics at the University of Michigan, Flint has released some astounding findings. In the last 36 years, the overall level of world poverty has declined by 80%. That means that while 1 out of four people subsisted on $1 a day or less in 1970 (using 1987 dollars), now only one out of 20 people fall below that poverty line. In a world of seven billion people, that translates to about 1.4 billion people who are better off than they would have been had the decrease not happened.

At the same page, Arthur Brooks of the American Enterprise Institute emphasized, "It's the greatest achievement in human history, and you never hear about it. 80 percent of the world's worst poverty has been eradicated in less than 40 years. That has never, ever happened before. In short, it was the free enterprise system, American style, which is our gift to the world."

The question now becomes what was the primary component that allowed so many more people to escape conditions pf poverty? Brooks states, "It was globalization, free trade, the boom in international entrepreneurship." As the Mackinac Center for Public Policy reports, "Much of this is the result of formerly Communist and Socialist economies becoming more market based. China, India and most of South America have been embracing capitalism for decades, while Africa also is moving toward freer markets in more recent years, according to the ‘Economic Freedom of the World' reports."

It is easy to take such an accomplishment for granted in our modern societies today, but we shouldn't. Such an achievement marks a fundamental change in the way all of humanity lives. As Nancy Pearcey, in her book Total Truth, wrote:


Throughout the vast scope of human history, most societies have lived at the subsistence level, with some 90 percent of the people's labor being required just to produce food for the community. This gave rise to an organic view of society, focusing on the survival of the whole rather than the liberty of the individual. With little defense against bad weather and poor harvests, "the survival of the whole was clearly linked to the diligence of each member," says one historian. And "with so many lives always at risk, concern for the public good predominated." The precariousness of life justified authoritarian control of economic relations.

With the rise of capitalism and the Industrial Revolution, however, for the first time many people were freed from the fear of want and hunger—a truly historic benchmark. What's more, the new economic network crisscrossing the country was being created by ordinary men and women: farmers, craftsmen, traders, merchants, shopkeepers, cattle drovers. It began to seem that ordinary people were quite capable of making rational choices to advance their own interests. And when they did, lo, they created wealth all around. (Pearcey, Total Truth, 285)