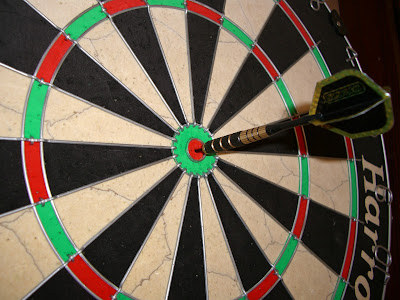 William Lane Craig is one of Christendom's most effective spokesmen arguing for God's existence. One of his famed "five arguments for God's existence" is the fine tuning of the universe for intelligent life. But the term "fine-tuning" really falls very short of just how precise the initial conditions and the universal constants are that allow us to live. They are infinitesimally fine numbers.

In his short book Does God Exist? Craig offers some examples as well as a couple of comparisons to set the stage. He writes:

Being mindful of those numbers, consider the following: The force of gravity is so finely tuned that an alteration in its value by even one part out of 1050 would have prevented a life-permitting universe. Similarly, a change in the value of the so-called cosmological constant, which drives the acceleration of the universe's expansion, by as little as one part in 10120 would have rendered the universe life-prohibiting. Now here's a corker: Roger Penrose of Oxford University has calculated that the odds of the universe's initial low entropy condition's existing by chance is on the order of one chance out of 1010 (123), a number which is so inconceivable that to call it astronomical would be a wild understatement.

The fine-tuning here is beyond comprehension. Having an accuracy of even one part out of 1060 is like firing a bullet toward the other side of the observable universe, twenty billion light years away, and nailing a one-inch target!

The examples of fine-tuning are so many and so various that they aren't likely to disappear with the advance of science. Like it or not, fine-tuning is just a fact of life which is scientifically well-established.

But, you might say, if the constants and quantities had had different values, then maybe different forms of life might have evolved! No, that underestimates the truly disastrous consequences of a change in the values of these constants and quantities. When scientists talk about a universe's being life-permitting, they're not talking about just present forms of life. By "life," scientists just mean the property of organisms to take in food, extract energy from it, grow, adapt to their environment, and reproduce. Anything that can fulfill those functions counts as life. And the point is, in order for life so-defined to exist, whatever form it might take, the constants and quantities of the universe have to be unbelievably fine-tuned; otherwise, disaster results. In the absence of fine-tuning, not even matter, not even chemistry, would exist, much less planets where life might evolve.

The question we face, then, is this: What is the best explanation of the cosmic fine-tuning? Many philosophers and scientists think that the reason that the universe is finely tuned for life is because it was designed to be life-permitting by an intelligent Designer.1