The True Value of Motherhood

It's no secret that our world is upside-down. Perhaps not upside-down in the physical sense, such as all the globes should be stood on their heads, but inverted as to the cultural understanding of value. We continue to use the wrong yardstick in measuring what's truly worthy to be pursued or what we deem as valuable. Thus we value the feelings of the adults and claim such are all that legitimately sanctions marriage or we value the desire to hold a child and think that such is all that is necessary to deem oneself worthy to become a parent. However, as anyone who has been married for an appreciable length of time will tell you, it requires quite a bit more sacrifice than the initial feeling can sustain. Similarly, parenthood requires sacrifice on the part of the parent for the sake of the child. This is one reason why both marriage and parenthood are inextricably bound together. 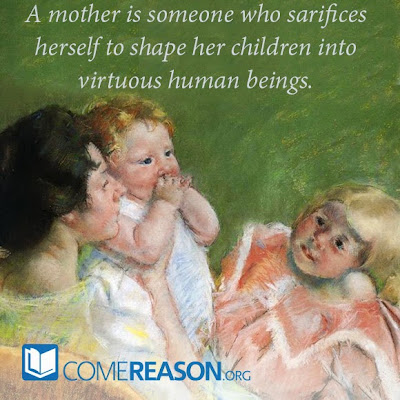 Many times I've had discussions with others about what has been labeled the disparity women face in the workplace. Women, they tell me, should be represented equally in the number of positions on every level across every field. (Of course, it seems these people don't care nearly as much about women garbage collectors or sewage technicians as they do video game developers or NASA engineers.) But I think that's completely wrong.

I agree that women are are just as valuable as men and can contribute to all fields. However, to ask for parity across all occupations is simply silly. It makes no sense to have women's worth measures in the game of career advancement, which is a game men have traditionally played throughout the ages.  Why should women measure their worth using a man's yardstick? It is like telling a British football player he must be measured by his execution of American football rules. Yes, they are both called football, but they are drastically different.

One of the reasons women are valuable is their ability to offer a different perspective and say to the men, "Perhaps your chasing after power and position and the almighty dollar isn't the thing that should drive you. Perhaps you should value your family more and value your time with them instead of spending the extra time at work and away from the home." For what is a worker other than an indentured servant that must answer to others (his deadlines, his employer, his stockholders, or his customer)?

That's why I see the mother who chooses to stay at home and rear her children as holding immense value. Here we have an individual willing to sacrifice for her family in order to shape the future leaders of society. She pours herself into helping them form their thoughts and their moral character. If people are more valuable than money, then those who grow children into moral human beings are doing more valuable work than the one who schlepps of to his nine-to-five (or seven-to-seven) job every day regardless of the position's title.

I'm not alone in my feelings. C.S. Lewis, in one of his letters, wrote something very similar, comparing how a woman who stays at home must feel with all the chores and demands place upon her.  He writes:


I think I can understand that feeling about a housewife's work being like that of Sisyphus (who was the stone rolling gentleman). But it is surely in reality the most important work in the world. What do ships, railways, miners, cars, government etc. exist for except that people may be fed, warmed, and safe in their own homes? As Dr. Johnson said, "To be happy at home is the end of all human endeavour". (1st to be happy to prepare for being happy in our own real home hereafter: 2nd in the meantime to be happy in our houses.) We wage war in order to have peace, we work in order to have leisure, we produce food in order to eat it. So your job is the one for which all others exist…1

I've seen this in my own household, with my wife putting her shoulder to the unending tasks of laundry, cooking, cleaning, shuttling children to various practices and appointments and doctors and classes. I've watched her seek to instill in each of my children a value for God and for the Good. I can think of no more honorable a position than mother and the person who devotes herself fully to such a task is worthy to be honored on a day like today. Happy Mother's Day to all the mothers out there. May you who shape human beings into virtuous men and women be blessed for your accomplishments.