Jonathan Morrow may not be a name most people recognize, but the author of Think Christianity has shown that he is adept at taking front-line issues in defending the faith and making them accessible to a broad audience. He does this again in his latest work, Questioning the Bible: 11 Major Challenges to the Bible's Authority. Here, Morrow delves into eleven common objections to the trustworthiness of not only the Biblical texts, but the general cultural understanding of the Bible as well, all written in a light, easy to understand style. 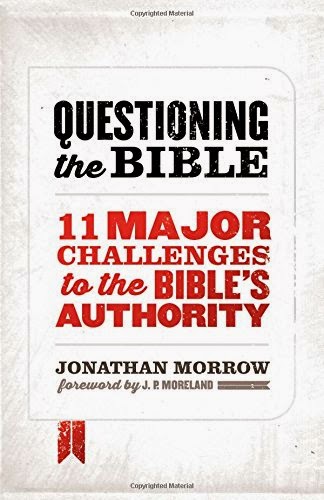 The book opens with a wonderful introduction addresses specifically to the Christian in the pew. Morrow sets the stage well as he notes that traditionally, pastors' sermons usually begin with the presupposition that the Bible is both accurate and authoritative. However, those concepts should not be so easily assumed, as the culture has become more and more secular, and therefore skeptical of those claims. In chapter one, Morrow next creates a broader foundation for his arguments by showing that faith may be built upon evidence, that the heroes of the Bible built their faith in just that way, and that we as modern Christians are also commanded to provide reasons for our own faith.

Once the foundation is established, Morrow moves into the question of the historicity of Jesus and the historical nature of the Gospels themselves. The former topic is key as the "Jesus as myth" movement many atheists propose seems to be gaining ground today, particularly via spurious Internet sources. Chapters 4 through 6 focus on the collection of texts that make up our New Testament, first showing that the Gospel accounts were chosen neither frivolously nor, as books like The Da Vinci Code would assert, to advance a certain political agenda. Morrow discusses the problem of forgeries that were identified and then shows why the biblical gospels cannot be considered forgeries themselves. H ends this section by showing why the modern New Testament text itself is a reliable copy of what the original authors wrote.

Once the biblical texts are confirmed accurate, the next question would be do they match with reality? While we may have the original texts, that doesn't mean they tell the truth or are giving us real knowledge. Morrow now answers these objections in the next three chapters, which deal with claims of Biblical contradictions, the claim that the Bible is unscientific, and the charge that the Bible is prejudiced or backwards compared to our modern morality. The last two chapters are reserved for issues focused on Christian application of the scriptures.

Overall, the book offers some really great tools to help the reader not only understand but implement the content. Chapters are short and the content is broken up by subheadings every page or two, creating bite-sized ideas that are easy to take in. There are not a lot of illustrations, however every chapter is summarized at its end with its "three big ideas", tips for how you can explain the main points of the chapter within a conversation, as well as a couple of resources that allows the student to dig deeper into that chapter's topic.

One key point is that there are three appendixes at the back of the books, which could really be three additional chapters. While not really fitting into the main scheme of questions that challenge the Bible's authority, they still touch on key issues that help establish the Bible as the authoritative word of God. While the writing style is conversational and friendly, each chapter is properly sourced, with the footnotes found at the back of the book.

As Morrow notes in his last appendix, today's youth are not taking the Bible as seriously as previous generations. Because of the growing secularization of the culture, the anti-institutional attitudes that pervade the younger generation, and the increasing onslaught of skeptics and atheists, Christian kids today have more confusion about the authority of Scripture than ever before. Questioning the Bible: 11 Major Challenges to the Bible's Authority goes a long way in quelling those doubts and reestablishing why trust in the Bible is a rational position to take. Morrow has given the church a gift in this book. I recommend it highly for youth groups, personal study, or simply general edification. You may be surprised—it could even answer questions you didn't know you had.
Posted by Lenny Esposito at 11:31 AM No comments:
Labels: book review, education, Jonathan Morrow, reliability of the Bible, textual criticism, youth
Older Posts Home
Subscribe to: Posts (Atom)