Are All These Natural Disasters Punishment from God? 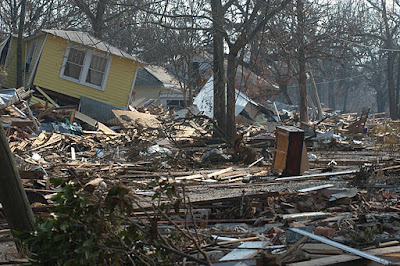 The news seems to be filled the last few days with one natural disaster on top of another. Texas has already been victimized by Hurricane Harvey, with massive flooding and untold suffering. It was the largest hurricane Texas has ever recorded and may be the most costly natural disaster in U.S. history with estimates placing the damage at up to $180 billion.1 But Houston may not hold that record long as Florida sits directly in the path of Hurricane Irma, with Hurricane Jose following behind her. We then have a massive 8.1 earthquake off the coast of Mexico which may cause a tsunami. What’s going on?

Given the terrible destruction and suffering caused by Harvey and Irma, people are beginning to wonder if there isn’t some kind of divine retribution going on. Jeffery Terry tweeted "#HurricaneHarvey is Gods punishment for those who support @realDonaldTrump may God have mercy on them" and University of Tampa Professor Ken Storey tweeted "I don’t believe in instant karma but this kinda feels like it for Texas. Hopefully this will help them realize the GOP doesn’t care about them." (Although Storey’s tweets are protected, you can view a screenshot here.)

#HurricaneHarvey is Gods punishment for those who support @realDonaldTrump may God have mercy on them
— Jeffrey Terry (@JeffandPolitics) August 26, 2017

Jennifer Lawrence didn’t blame God, but did invoke Mother Nature and insinuated that the recent destructions are somehow related to the recent election of President Trump, saying "We voted and it was really startling. You know you’re watching these hurricanes now, and it’s really hard especially while promoting this movie, not to… not to feel Mother Nature’s rage, wrath."2  Of course Christians are not immune to the temptation, either. Newsweek reports that Rick Wiles claimed "‘here’s a city that has boasted of its LGBT devotion, its affinity for the sexual perversion movement in America. They’re underwater."3


Shark Attacks and Jumping the Shark

So, with so many out of the ordinary natural disasters occurring, shouldn’t we attribute them to God’s wrath? Before we jump to that conclusion, maybe it would be wise to find out just how out of the ordinary this weather cycle is. It seems that with media channels reporting the continued destruction in our 24-hour news cycle, one could hardly be blamed for assuming 2017 was a special year for natural disasters, but that’s not necessarily the case. According to the folks over at Weather underground, 2005 was truly a record year, with 28 storms and 15 hurricanes in the North Atlantic. Of those, five were large and/or deadly enough to have their names retired (Dennis, Katrina, Rita, Stan, Wilma). 2017 isn’t close to that yet.

Interestingly, we’ve actually been in a downward trend of hurricanes that hit the United States. Writing for the NOAA, climate scientists Gabriel A. Vecchi and Thomas R. Knutson show how the United States has been seeing a decrease in the number of storms causing damage on land. They provide the figure below with the following caption: 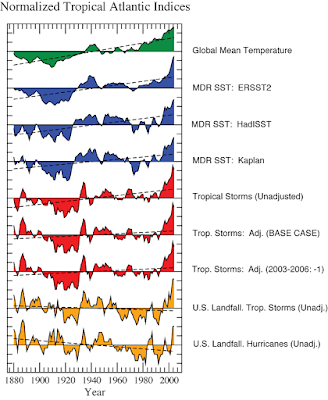 Since the late-19th Century global (green) and tropical Atlantic (blue) temperatures have risen – an increase that was partly driven by increased greenhouse gases. If one does not account for possible missed storms (first red line) Atlantic tropical storms appear to have increased with temperature; however, once one accounts for possible missed storms (second and third red lines) basinwide storms have not exhibited a significant increase. When one focuses only on landfalling storms (yellow lines) the nominal trend has been for a decrease.4

So, the number of hurricanes displacing people and causing widespread damage is not increasing, even though we may think it is. A lot of it is because we forget just how bad seasons like 2005 really were and compare this year to last year or to two years ago. Some of it is the continued discussion in the media, spurring what is sometimes called "the shark attack effect" following the release of the book and movie Jaws. A quick explanation is that while shark attacks in real life are very rare (more people die from bee stings in this country each year than from shark attacks), once it captures our psyche, we are prone to look for more examples to confirm our fears. It’s kind of like how only after buying a new car you notice how many of that same model are on the road.

We live in a fallen world and natural disasters are a part of that fallenness. It is also true that God has and will use natural calamities to punish or correct nations. However, when people jump to that conclusion first, they remind me of Jesus’ disciples in John 9, who asked him, Rabbi, who sinned, this man or his parents, that he was born blind?" There, Jesus gave a most prescient answer: "It was not that this man sinned, or his parents, but that the works of God might be displayed in him." That should be the Christian response. Let us show the goodness of Christ’s love by reaching out to those afflicted by nature’s devastation and stop trying to pin the blame on some perceived sin. It will be a more effective way to share your faith with others.