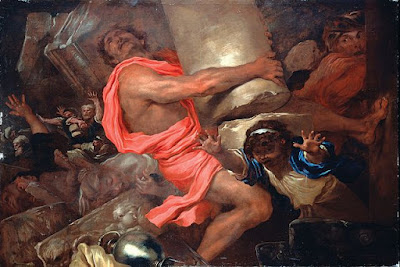 Certainly one of the most fantastic characters in the Bible is Samson. Everything about his exploits reads like a comic book: killing a lion bare-handed, slaying 1,000 Philistines with the jawbone of a donkey, pulling up the gates of Gaza. He seems to be a man of steel living in the Bronze Age!

But, just like the modern day Superman (who was modeled in part from Sampson), the hero had his own form of kryptonite in pretty faces. Samson had a weakness for woman and no one can think of his name without also recalling the name Delilah, who prodded the source of his strength from him so she could then sell him to the Philistines. Even in this story we see a tragic climax, where Samson, blinded by his enemy is placed in the center of the temple of Dagon between two pillars to entertain his foes. He prays to God for strength one last time and collapses the pillars so the Philistines both inside the structure and on the roof were killed by the collapse, along with Sampson himself.

Of course, such as story strikes the modern ear as too fantastic to believe. How could such a character as Sampson have lived? Obviously, we don't have any way of testing whether he did beyond the record presented to us in the book of Judges. It's therefore not unexpected that the tales of Sampson's exploits would be met with skepticism from scholars like John L. McKenzie who writes:


…the historical quality of heroic tales is always low. This is easy to see in Samson. A palace or temple which could support several thousand people on its roof supported by two central pillars separated by an arm's length never existed.[1]

McKenzie is right in noting the detail of two pillars holding up a roof would be odd. In fact, Philistine temples that had been known to archaeologists didn't have such a design at all—until the 1970s when Amihar Mazar unearthed a temple at Tell Qasile from the exact same time period of Sampson and discovered a unique feature of its design was it had two central pillars in the center that supported the roof.[2] Nearly two decades later, while digging in another site some 20 miles away, archaeologist Trude Dothan found another Philistine temple with a similar structure:

To be clear, I don't believe either of these temples is the one mentioned in the Samson story. However, the archaeological discoveries do show that such a design wasn't at all uncommon in Philistine architecture. It doesn't prove the Sampson story as true, but it definitely removes the claim that the two pillars are a fictitious invention of the author of Judges.

Further, it lends credibility to the author's reliability in getting certain details right, since Jewish architecture, definitely did not feature two central pillars. The author seems to have some real familiarity with Philistine temple construction, bolstering his reliability in the process. This is just one more way modern archaeology has lent support to the biblical accounts and why we continue to trust the Scriptures.

Posted by Lenny Esposito at 11:27 AM
Labels: archaeology, history, reliability of the Bible, Sampson