Many people are anxiously awaiting the United States Supreme Court Decisions on the constitutionality of California's Proposition 8 and the federal Defense of Marriage Act (DOMA). Many supporters of same-sex marriage think that once the Court rules on the issue, they will be vindicated and anyone who views SSM as either a moral violation or a biological impossibility will be proven wrong. But the Supreme Court wasn't designed to provide good answers to either morality or biology. For a clear example of that, we need only look to the fate of Carrie Buck. 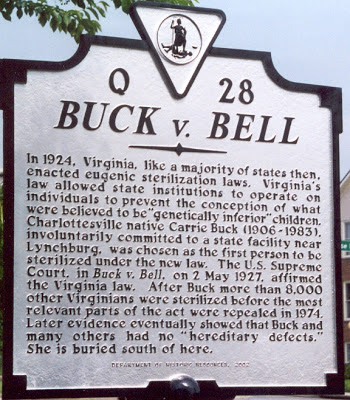 According to the Encyclopedia of Virginia, Buck was born in Charlottesville in 1906. Her father died when she was very young. When she was three her mother was committed to the Virginia State Colony for Epileptics and Feeble-Minded, mostly on the basis of her ongoing promiscuity.1 Buck then lived with a foster family, developing normally until she became pregnant at the age of 16. Ignoring Buck's claims that she was raped by their nephew, her foster family foisted the charge of promiscuity and feeble-mindedness on Buck and had her likewise committed.

About this time, the state of Virginia had recently passed a law that "the state could sterilize anyone found to be incompetent because of alcoholism, epilepsy, feeblemindedness, insanity, or other factors." The lawmakers knew their legislation was a constitutional gamble. As the Encyclopedia puts it:


"Behind the law was the eugenic assumption that these traits were hereditary and that sexual sterilization could thus prevent their transmission. Uncertain that the new law could withstand a constitutional challenge, the framers and supporters of the law arranged to test it in court. They chose Buck in the belief that she had inherited her feeblemindedness from her mother and that her daughter showed signs of slow mental development as well."2

Buck's forced sterilization worked its way up Virginia's appellate courts until she appeared before the U.S. Supreme Court in April of 1927. On May 2 of that year, Justice Oliver Wendell Holmes, Jr., speaking on behalf of an 8-1 majority ruled that the forced sterilization law was constitutional. In the majority opinion Holmes famously wrote:


"It is better for all the world, if instead of waiting to execute degenerate offspring for crime, or to let them starve for their imbecility, society can prevent those who are manifestly unfit from continuing their kind. The principle that sustains compulsory vaccination is broad enough to cover cutting the Fallopian tubes. Jacobson v. Massachusetts, 197 U.S. 11. Three generations of imbeciles are enough."3

By all accounts Holmes was a brilliant U.S. Supreme Court Justice. He served for almost thirty years and is considered a scholar "who, more than any other individual, shaped the law of the 20th century" according to biographer Albert W. Alschuler.4 But as a legal scholar, Holmes was neither a theologian nor a biologist. He was neither a philosopher nor a geneticist. So, how could that Court be the last word morally for a question that has at its basis what being human means?

Of course, the pro-eugenics crowd testified with their experts as to Carrie's diagnosis. The Court's decision, though, did not turn on whether Carrie Buck's diagnosis was accurate, even though Holmes believed it was.  In the majority opinion he wrote, "There can be no doubt that so far as procedure is concerned the rights of the patient are most carefully considered, and as every step in this case was taken in scrupulous compliance with the statute and after months of observation, there is no doubt that in that respect the plaintiff in error has had due process of law. The attack is not upon the procedure but upon the substantive law"5 (emphasis added).

Holmes was a lawyer; as such he ruled on the legality of the laws set before him. In order to declare eugenics acceptable, the justices would have to reason on legal grounds. Therefore, the majority agreed that "compulsory vaccination is broad enough to cover cutting the Fallopian tubes." Eight Supreme Court Justices had to change the definition of what a vaccination is in order to legally include forced sterilization. Only then could eugenics practices gain traction. But in so doing the Court made the claim that the state rather than God can decide how human reproduction should work in the lives of certain individuals.

In fact, Aubrey Strode, the attorney arguing on behalf of Virginia made this explicit. According to Scott Polirstok:


"Strode argued that a feebleminded individual will benefit from having his/her lost liberty ‘restored' following a sterilization procedure. In other words, a feebleminded individual who had not as yet been sterilized, did not have any liberty as a sexual being because of the fear of producing children who would be mentally deficient. However once sterilized, the individual and society could be free of the fear of producing defective children and hence liberty would be ‘restored'."6

Holmes' decision in this case was neither morally upright nor biologically accurate. Today we see such a decision as abhorrent, and rightfully so. But it was always abhorrent, even when the court ruled that it was legal and a decision that was "better for the world" or that the individuals would be "restored" to sexual liberty. It didn't matter that eight very intelligent and well-schooled justices saw fit to allow such atrocities to American citizens. They were wrong and their ruling did not make forced sterilizations moral.

When we try to claim that simply because something is legal that makes it moral, we fall victim to a type of pragmatic moral relativism that will blow to and fro with the whims of the culture. But that's not what morality is. Real moral values and duties don't change. They are objective, based in God and who we are as human beings. The circumstances of how those values and duties play out may differ, but the principles remain unchanged. So, don't think that any court decision means the death knell for morality.

Carrie Buck was forcibly sterilized in 1927 and Virginia perpetrated the same cruelty on over 8,300 others for nearly fifty years. Nationally, the number of forced sterilizations is estimated at 60,0007 and sterilizations continued through most of the 1970's. Many of the victims are still alive and seek reparations from the state. And if you're wondering, the Buck v. Bell decision has never been overturned. Does that make it the right thing to do?