Disinformation in "Muslims in America" 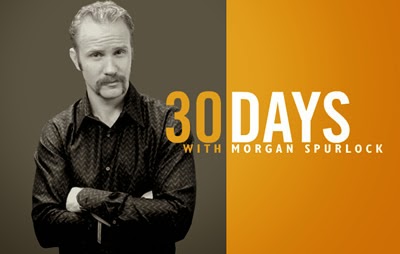 Morgan Spurlock had aired a television show looking at trying to understand different types of people in the U.S., but don't expect any objectivity from the show. 30 Days , Spurlock's series on Fox cable channel F/X sought to document the changing views of individuals who are placed in a radically different environment for thirty days. The show was entitled "Muslims in America" and looked to see what happens when a "fundamentalist Christian" is asked to live and worship as a Muslim. BBC News reported this as one of Spurlock's favorites:


"We took a fundamentalist Christian from my home state of West Virginia, somebody who is very pro-war, pro-'us versus them,' that when you hear Muslim the only thing he thinks of is a guy standing on a mountain with an AK-47," Spurlock said.
The man leaves his wife and children at home and goes to live with a Muslim family in Dearborn, Michigan, home to one of the largest Muslim populations in the United States.

"He dresses as a Muslim, eats as a Muslim, he prays five time a day, he studies the Koran daily, he learns to speak Arabic, he works with an imam, a Muslim cleric, to learn the history of Islam, what are the five pillars, why are they important." And the transformation this guy goes through in 30 days is "miraculous, it's incredible," Spurlock said.

This all sounds interesting, but the main problem comes in when you find out that the "documentary" is nothing of the sort. The show's producers had the outcome determined even before they started shooting, according to Debbie Schlussel, a reporter and commentator who specializes in fundamentalist Islam.

In her blog Schlussel writes, "When I met David Stacy, I was amazed at how ignorant and uninformed he was. This newly-inducted 'expert' on Islam never heard of Wahhabism--the extremist Sunni strain of Islam that now dominates the religion. He was unfamiliar with terrorist groups like Hamas and Hezbollah. He did not believe me that Hezbollah murdered hundreds of U.S. Marines and civilians in Beirut and elsewhere. He seemed mystified to learn that President Bush shut down American Islamic charities, like the Holy Land Foundation and Global Relief Foundation, for funding Hamas and Al Qaeda. He hadn't a clue about taqiyyah, the Koranic principle allowing deception of non-Muslims."

Schlussel then writes, "Spurlock planned the outcome of this 'immersion' show and he found the perfect tabula rasa in Stacy. Spurlock also found the perfect 'experts' and 'key members' of Detroit's Islamic community to propagandize their easily swayed dupe.

"Paul Findley is listed as an 'expert' consultant for the show. A non-Muslim with no special knowledge of Islam, Findley's real expertise is having been an anti-Israel congressman who was defeated when he was targeted by Jewish groups. Another 'expert' is Muqtedar Khan, a faux moderate professor with close ties to Muslim extremist group, Al Muhajiroun, as documented by Militant Islam Monitor."
Posted by Lenny Esposito at 10:06 AM