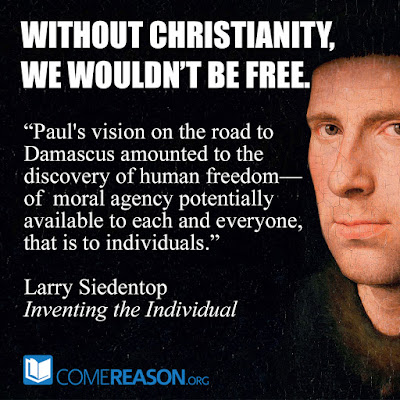 People want to be free. In fact, most of the battles now fought in the culture wars are about individuals who feel they have not simply a desire but a right to express their individual freedom as to who they are and how they are seen by others. The transgender bathroom fiasco is a prime example of this.

It is their right, they demand, to present themselves as they personally wish to be presented. They maintain that neither culture nor tradition should trump who they are as individuals and they're pursued various legal strategies to assert individual rights as real and inviolate. But where do those rights come from?

In one sense I agree with the battlers. Culture, tradition and even government cannot bestow rights (properly understood) upon people. Any right that is granted by an institution is not an inviolate right by definition. If the state can create and bestow rights upon an individual, then the state can take those rights away. Such "rights" amount to privileges that the state allows one to exercise.

In fact, throughout much of human history, the individual was subservient to the group. In his book Inventing the Individual: The Origins of Western Liberalism, scholar Larry Siedentop outlines how all cultures prior to Christ were first built around the family unit which expanded to the city-state, the polis.1 He writes how the Greeks saw devotion to the welfare of the city as the highest virtue. Rome demanded devotion to the emperor and the empire. Conformity to the powers that be was the only thing that made one a worthwhile citizen.

So what changed? Where did this idea that the state should be respectful of the rights of the citizen more than the citizen must conform to the needs of the state come from? Siedentop states plainly, it is Christianity that declared such a radically new concept to humanity:


Paul's vision on the road to Damascus amounted to the discovery of human freedom—of moral agency potentially available to each and everyone, that is to individuals. This 'universal' freedom, with its moral implications, was utterly different from the freedom enjoyed by the privileged class of citizens in the polis.

In his conception of the Christ, Paul brings together basic features of Jewish and Greek thought to create something new. We can see in a famous passage from his letters, the letter to the Galatians, dating from about twenty years after Jesus' crucifixion. Paul uses Jesus' emphasis on the fatherhood of God to insist on the brotherhood of man and, indirectly, to proclaim his own role as apostle to the Gentiles. 'There is neither Jew nor Greek, there is neither slave nor free; there is neither male nor female; for you are all one in Christ Jesus.' Paul's 'one' signals a new transparency in human relations. Through his conception of the Christ, Paul insists on the moral equality of humans, on a status shared equally by all. And his great mission becomes the salvation of individual souls, through sharing his vision of the Christ - a vision which makes it possible to create a new self.2

Paul grounds his view of humanity as valuable because each individual bears the image of God. People are not simply material beings. If they were, then they could be measured by their value to the group. But as individual image bearers "conventional social roles—whether of father, daughter, official, priest or slave—become secondary in relation to that primary role."3  This stands in stark contrast to how all other cultures saw themselves by either their position in the public sphere and their position within the domestic sphere, which Siedentop explains "was understood as the sphere of the family, rather than that of individuals endowed with rights. The domestic sphere was a sphere of inequality. Inequality of roles was fundamental to the worship of the ancient family."4

It is Christianity that makes any sense of individual rights at all. Without a very specific Christian theology of man, the assertion that human beings are equal and each person has rights is as meaningless as holding that individual cells have certain rights without respect to the body as a whole.  There is simply no other way to anchor the rights of human beings.

I don't agree on the bathroom issue. I believe it is ludicrous to think that one's desire can overrule reality. No matter how convinced an anorexic is that she is fat, the reality is her self-starvation is endangering to her person. The biology of her body is in conflict with her self-concept. Similarly, those with gender dysphoria are at odds with their biology. Restrooms serve a very utilitarian function, wholly built to serve human biological needs. Separating bathrooms by biological sex bathroom doesn't violate one's rights because it is our biology that makes us human. Sex is a real differentiator and shouldn't be ignored. But even more importantly, how can anyone consistently argue for their rights against Christian theology when it is Christian theology that provides the very foundation for having rights at all? The contradiction is striking.