Did God Make Life on Other Planets? 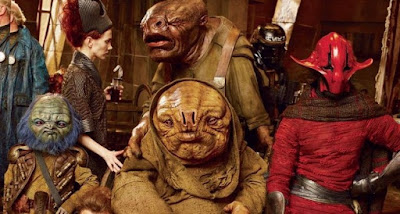 This month, the seventh Star Wars movie is set to debut. Fans are looking forward to seeing not only the action but the fantastic inhabitants of far off worlds, like those found in the now-famous cantina scene from A New Hope. The sheer number of diverse creatures from a host of worlds pictured there plays on our sense of wonder.

It also leads us to think about the real world and our place in it. Are we alone in the universe or could there be intelligent life found in some planet or galaxy far, far away? In our galaxy alone there exists some 200 billion stars1, many which have the potential for planetary systems, and ours is just one galaxy out of billions and billions. If God created such a vast universe, wouldn't it be likely that at least a few others would have life on them?


The Bible Doesn't Rule Out Life on Other Planets

First, it is quite possible that some kind of life could exist on other planets. There is nothing in the Bible that says God only created life for the earth. He could have created some kind of life elsewhere, too. Even on earth, when we travel to the harshest environments, such as volcanic vents in the ocean floor, we are surprised to find life in such unrelenting places.2 Microbes have even been found surviving in the stratosphere, miles above the earth. So to have some kind of an ecosystem found on another planet, even when that planet could not support human life is not as inconceivable as it may seem to be.

However, when this question is asked most of the time, people aren't asking about fungus, moss, or microbes. They want to know whether intelligent life—life capable of communication and abstract thought like humans are—is possible on other planets. I think the answer is such life is highly doubtful.

If advanced life were to exist on other planets, we begin to run into the same theological issues on free will and sin that have so frequently become a part of our conversations on evil and God's existence. In order to be truly free, alien beings must also be capable of sinning. However, if they were to sin, it would place them in a greater predicament.

In the book of Hebrews, the writer explains why Jesus is greater than the angelic beings, who were held in high esteem by first century Jewish culture. He quotes Psalm 2, then explains that human beings, not the angels ae the beneficiaries of Jesus's salvific work on the cross:


But we see him who for a little while was made lower than the angels, namely Jesus, crowned with glory and honor because of the suffering of death, so that by the grace of God he might taste death for everyone. For it was fitting that he, for whom and by whom all things exist, in bringing many sons to glory, should make the founder of their salvation perfect through suffering. For he who sanctifies and those who are sanctified all have one source. That is why he is not ashamed to call them brothers...

For surely it is not angels that he helps, but he helps the offspring of Abraham. Therefore he had to be made like his brothers in every respect, so that he might become a merciful and faithful high priest in the service of God, to make propitiation for the sins of the people. (Heb. 2:9-11, 16-17, ESV).

Later, the writer explains that Jesus's sacrifice was a singular event: "He has no need, like those high priests, to offer sacrifices daily, first for his own sins and then for those of the people, since he did this once for all when he offered up himself." (Heb. 7:27, ESV).

Therefore, if alien beings were advanced enough to make free choices for themselves, they would either need to be perfect throughout all eternity (which is highly unlikely) or irredeemable. Given the verses above, one can see why fallen angels cannot be redeemed and why God had to create Hell for them.


Thinking through the Presupposition

I've been asked this question many times, and I think it's a helpful one. It shows that human beings tend to think spatially about our world. If our planet takes up such a little place in the great big and vast universe that God created, certainly he would have placed life elsewhere, right? But God is an immaterial being. He doesn't value us on the basis of our mass. He values us because we bear his image. Therefore, I have no problem believing that God could have created the entire universe just to support life on one single planet, so he could have creatures who know and love him. That's true value.