The Fact of the Resurrection Part 2 - Too Soon for Fables

Last time we studied how the resurrection accounts read like history. But another reason to believe in the resurrection of Christ is how close the records we have were to the actual events they record. 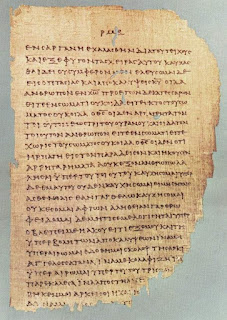 In the game of telephone, a message is told from person to person until it eventually becomes unrecognizable to its initiator. There is less chance the message has been corrupted the closer a person is to the originator. This is one of the ways scholars studying ancient historical events judge a record's accuracy.

Most conservative scholars date the Gospel accounts of Jesus' death and resurrection from between A.D. 50 to A.D. 80. If we are to assume Jesus died somewhere near 30 A.D., then these historical records would be between 20 to 50 years after the events they record. Not only are these dates very close to the actual events by historical standards, but that also implies that the Gospels were circulated when the apostles were still alive to be questioned by skeptics and detractors.

Now there are other scholars who would prefer a late dating of the Gospels, from the middle of the first century to perhaps as late as the beginning of the second. But late-dating the Gospels doesn't put the historicity of the resurrection in doubt, because a record exists that is older still than any of the Gospel accounts.

In 1 Corinthians 15 verses 3-8 the Apostle Paul writes "For I delivered unto you as of first importance that which I also received, that Christ died for our sins according to the Scriptures, and that He appeared to Cephas then to the twelve. After that He appeared to more than five hundred brethren at one time... then He appeared to James, then to all the apostles, and last of all, as one untimely born, He appeared to me also."

Nearly all scholars, those both sympathetic to Christianity and skeptical of it, believe that First Corinthians was written by Paul and was written about 55 or 56. However, scholarship also shows that the above passage is considered an ancient tradition that Paul received from others in the early church when he first became a convert to Christianity. This means that the passage in 1 Corinthians 15 dates from somewhere between two to eight years after Jesus' death!

That early dating means that it is virtually impossible for the resurrection account to be a myth that gradually grew into the church tradition. It had to be accounts from eyewitnesses who saw the events themselves, otherwise too many people would be around to contradict the events in question.

Because this evidence is so convincing, there are those doubters who feel that the resurrection account was a deliberate fraud made up by the apostles to continue their movement. In our next post, we'll look at those claims and show why this couldn't be so. (If you'd like a preview of some of the things we'll discuss then, you can read our article "Is Eyewitness Testimony Reliable?")

For a modern day example to this, think of someone telling you that John F. Kennedy didn't die in November of 1963. He is still alive and in hiding because the CIA wanted to remove him from office. The government made the whole assassination up for their benefit. The problem with such a story is that there are too many people still alive who remember the event and can contradict your assertion.

The more we study the documents testifying to the resurrection of Jesus, the more we can understand why it is called "the most well-attested fact of ancient history." I hope these discussions bolster your faith in Christ and Him being raised from the dead. Comment below and let us know what you think!
Posted by Lenny Esposito at 4:31 PM
Labels: Easter, gospel, history, Jesus, resurrection