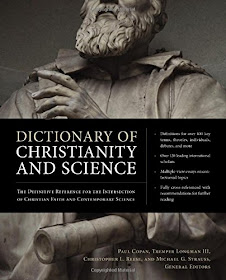 It should be no secret science plays an inordinately large role on modern culture. As I've noted before, scientific advancements have allowed human beings banish diseases that were once fatal, create new materials in the lab that outrival nature, and generally control and command their world in ways that had heretofore been thought impossible. In short, the last 150 years of scientific discovery have changed everything about how humans live and interact with their world.

Because of these great successes, societal attitudes toward science have become distorted. People place science on a pedestal, believing that if a claim is scientific, it will be unbiased and more reliable than other forms of knowledge. Science and faith are seen as foes and atheists will challenge Christians, claiming scientific facts are incrementally undermining Christian beliefs.

In reality the war between Christianity and science is a myth and the recently released Dictionary of Christianity and Science goes a long way toward helping to dispel that myth as the fraud it is. General Editors Paul Copan, Tremper Longman III, Christopher L. Reese, and Michael G. Strauss have assembled a strong collection of writings covering a wide range of topics in what would more properly be understood as a cyclopedic volume instead of a dictionary. With over 140 top scholars writing on over 450 topics, the Dictionary serves as an excellent starting point to research various topics that most Christians will face when researching or discussing these issues.

Given the breadth of the subject matter, the articles could have all been relegated to short introductory overviews and a list of additional resources at the end of each entry. But the editors wisely chose to have three different types of articles appear in the Dictionary. For the less controversial and more agreed upon topics (such as key historical figures in science or specific terms like emrpicism), an introductory article is all that's warranted. But for other entries they chose to include longer articles  labeled essays that give more background, competing views, and the evidence they rely upon. The entry on "The Genesis Flood and Geology" is an example of one such essay.

Finally, there are the multiple-view discussions where different scholars who take up contrary positions are each allowed an extended article within the same entry. For example, of one were to look up the state of creationism, the user would be greeted with an introductory article on the concept of creation, an article entitled "Creation, Intelligent Design and the Courts," and four essays on creationism: one critical and one supportive of old-earth creationism and one critical and one supportive of young-earth creationism.

I'm really impressed with the level of scholarship and the wide range of topics that have been compiled in the volume. The editors included key figures like Thomas Kuhn and philosophical concepts like Inference to the Best Explanation that are not well-known outside the study of the philosophy of science. Further, articles on people like Galileo Galilei seek to strip the legendary tales of his scientific advancement and show why it would be incorrect to see his conflict with the College of Cardinals as a case of science versus religion.

There are a few drawbacks to the book. First, there is no table of contents or topical index. I suspect that is because it is marketed as a dictionary and as such will have its entries placed in alphabetical order. However, if someone looks up the aforementioned creation entry, he would be missing several other articles that focus on the topic, with multiple-view entries on the flood and on the Genesis account in the F and G areas respectively. One would then have to turn to the I section in order to read the Intelligent Design entry. And if someone doesn't know who Thomas Kuhn is and why his work is so important, it may be easy to miss this entry.

Secondly, while it cannot be avoided, the book is a product of this particular time. The articles that have the most information are those that are the most debated right now. In ten years, this volume will suffer from its age as some debates will change, others may be settled, and new discoveries will make several of the entries obsolete. I would hope an accompanying online site would be able to provide some kind of resource direction until the inevitable updated volume will be released. But these are just quibbles in an otherwise excellent product.

I think every Christian family should have a copy of the Dictionary of Christianity and Science. Anyone who has sought to understand controversial issues on science and faith by searching on Google or looking up the topic on Wikipedia knows that getting solid information from top scholars is challenging to say the least. I've noted myself that any old fool with a modem and an opinion can post online or edit a Wikipedia entry. The Dictionary of Christianity and Science gives the Christian a strong place to start in his or her understanding of how their faith does not contradict modern scientific advancement as well as to get a deeper understanding of what science actually is and where the state of the debates lie.
Lenny Esposito at 2:21 PM