Don't Be Afraid of Questions about Evil 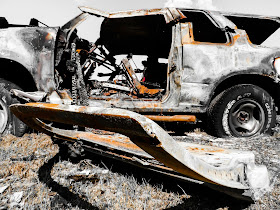 One of the most difficult objections a Christian faces is what to do with the problem of evil. They claim the Christian God doesn't make sense given all the evil we see in the world today. Some non-believers play the objection like a trump card, thinking this proves the irrationality of believing in a divine being.

I would encourage the Christian to not shy away from the question of evil in the world, but embrace it. That's because the problem of evil is a problem not simply for the Christian, but for everybody.

There are a lot of things on which people of different political and social viewpoints disagree, but I think everyone can be in agreement that the world isn't as it should be. When atheists complain that all the evil in the world shows there is no God, they are admitting there is a right and wrong, and there's too much wrong in the world. Social justice warriors on college campuses try to silence what they deem as evil speech while those on the other side see the act of censorship itself as evil. ISIS, people suffering in the inner cities, regimes ruled by tyrants, kids starving in underdeveloped countries are all serious issues in need of thoughtful solutions.


Three Choices for a Broken World

When a man on an expedition finds he has damaged his only transport vehicle to the point where it isn't running reliably, he is faced with choosing one of three options. He may try to fix it himself. This is certainly the quickest way to solve the problem, but it isn't as easy as it sounds. Repairing a vehicle is complicated. It requires the proper diagnostics, the proper tools, the right replacement parts, and the proper knowledge. For example, modern vehicles equipped with computers and sensors cannot be fixed without high-tech tools. And the risk of assuming one is more capable than the person's skill warrants could lead to making things worse.

A second option is the man may ignore the issues and continue to drive the vehicle. He may place a piece of tape over that warning light and hope all the stalls and grinding won't get too bad until he arrives at his destination. But when survival is at stake, this is certainly not a prudent idea. There's a high risk the vehicle will fail completely, leaving him stranded and in danger for his life. Or perhaps the brakes fail or the accelerator sticks and the vehicle could then cause his death.

The third option for the man would be to return to the company from which he obtained the vehicle and ask those responsible for it to correct the defects or replace it. Once his vehicle is running as it should, he may proceed to explore the wonders of the unknown without concern for his travel. These strike me as the only options available and the man must choose at least one of them.

The options we face with the problem of evil are much like those the explorer faces. Some believe we can fix it all on our own. However, not everyone is agreed even on what constitutes evil. Hot button issues such as abortion, immigration, dictatorial regimes, persecution of people of faith, or persecution of LGBT people are just a few of the many, many, difficult and contrasting viewpoints we face today. How do we fix that?

Further, what are the proper diagnostics to use? Everyone may say certain issues are obvious. Going back to our analogy, a fuel leak would certainly be a problem in need of repair. However if the vehicle you're diagnosing is an SR-71 plane, the plane is designed to leak fuel while on the ground. In the air the tanks expand and seal. If you "fix" the fuel leak on the ground, they will burst in operation.

The second choice is to try and ignore the issue. One may hold this world as ultimately meaningless. In the final reality, one must not love too much or hate too much. All desires equally lead one astray. One must simply retreat within oneself in order to find Nirvana and become like a candle that has been blown out.

Interestingly, there is a contingent within modern atheism that has chosen this second option in a different way. Given that we are all simply electro-chemical matter that happened to evolve over time by chance, good and evil don't really make sense. Nature is red in tooth and claw and that is simply the way it is. Black widows devour their mates, male chimps cannibalize male infants, and cone cannot assign a moral value to those acts. As animals, we are simply acting upon our urges, too.

The third choice is to try and seek out the one who made the world in the first place.

Certainly, there are people who don't fall neatly into one camp. They try to balance two or three of the options based on the situation at hand. But Christianity holds the high ground here. The Christian worldview holds that we cannot fix it ourselves, nor should we ignore evil. Christianity teaches that God must come down and fix the problem himself. And since it is God is the one who grounds all good, he can be relied upon to properly diagnose and fix the problem. This makes perfect sense.

We've not yet come to the end of all evil. That will happen. But of all the different worldviews available, Christianity offers a rational solution to a pressing need. But remember the next time you may be asked "What about all the evil in the world," the problem of evil is as much of a problem for the atheist as it is for anyone else.
Lenny Esposito at 1:27 PM