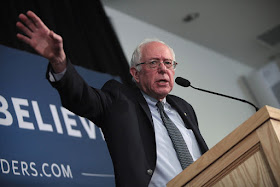 Religious liberty is a key right recognized by all civilized people. The ability for one to not only worship as he believes but to live out that faith is enshrined in the United States Constitution as our first freedom, and it points back to the Pilgrims' efforts to settle a new land where they could do just that.

That's why I'm particularly bothered by the inquisition Senator Bernie Sanders recently inflicted upon White House nominee Russell Vought, as David French highlighted in his piece. There, Sanders interrogates Vought on his Christian beliefs asking him about points he made in an article written for Wheaton College's magazine:


Sanders: You wrote, "Muslims do not simply have a deficient theology. They do not know God because they have rejected Jesus Christ, His Son, and they stand condemned." Do you believe that that statement is Islamophobic?[1]

Vought responds by denying the Islamophobic charge, but as he tries to explain how he as writing from a theological viewpoint for a theological audience, Sanders interrupts him and doubles down, asking "Do you believe people in the Muslim religion stand condemned? Is that your view?" Certainly this is a question of theological belief. "Stand condemned" is a phrase relating to the belief of one's relationship to God, not with other citizens or the body politic at all. Yet, any time Vought tried to explain that he was restating a core tenet of the Christian faith, Sanders would double-down:


Vought: Senator, I'm a Christian, and I wrote that piece in accordance with the statement of faith at Wheaton College…

Sanders: I understand that. I don't know how many Muslims there are in America. Maybe a couple million. Are you suggesting that all those people stand condemned? What about Jews? Do they stand condemned too?

Sanders: You think your statement that you put into that publication, they do not know God because they rejected Jesus Christ, His Son, and they stand condemned, do you think that's respectful of other religions?

Vought: Senator, I wrote a post based on being a Christian and attending a Christian school that has a statement of faith that speaks clearly in regard to the centrality of Jesus Christ in salvation.

Sanders: I would simply say, Mr. Chairman, that this nominee is really not someone who this country is supposed to be about.

The Question of Christian Exclusivism

You can watch the entire exchange yourself, but notice what Bernie Sanders was objecting to was Christianity, although he did try to paint is as Voght holding a bias. Sanders is right in recognizing there are other belief systems out there, like Muslims, Buddhists, Hindus, and Jews. But any faithful Jew must believe the Hindu is violating God's first commandment to have no other gods before him. Muslims hold that Christians and Jews who reject the prophethood of Muhammad stand condemned before Allah. Atheists write books condemning Christians as being deluded and telling how their faith poisons everything.

The objection that Sanders voices is an old one. How can Christianity be about love if you think everyone else is going to hell? But the problem is simply this: all beliefs carry truth claims. Therefore, if you don't hold to the the belief, you reject the truth claim that comes with it. If Muhammad was truly Allah's prophet, then Christians are wrong, but if Jesus is truly the resurrected Son of God, then Muslims are wrong. Both cannot be right.

Even Bernie Sanders himself castigates others for not abiding by his economic beliefs. A Washington Examiner story recently highlighted Sander's tweet exclaiming: "How many yachts do billionaires need? How many cars do they need? Give us a break. You can't have it all."[2] Is THAT what Sanders thinks this country is supposed to be about?

By positioning Vought's beliefs as disqualifying, Sanders is guilty of his own standard. He's condemning Vought's beliefs which he expressed in that Wheaton article. Sanders' belief in non-offensiveness is itself contradictory! But this is the problem with many progressives today. They cannot grasp the fact that a person can believe others have inestimable intrinsic worth while still believing they are in danger of offending almighty God. Heck, Sanders thinks it is OK for him (a millionaire with three houses) to tell others how much they should or shouldn't possess, but not for a Christian man wring for a Christian college's magazine to state basic Christian doctrine.

Sanders is completely wrong. One should be able to be appointed to public office even if his orthodox religious views are not shared by a senator from Vermont. That is exactly what this country is about and what it always has been about. It's what makes America—dare I say—exceptional.