The Problem of Living in a Crotch-Driven Culture 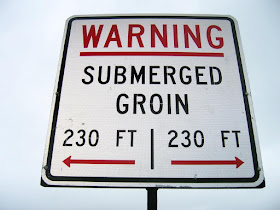 One can tell a lot about the value of a society by what occupies its attention and effort. The Greeks were thinkers, who spent a significant amount of time developing philosophy and logic. They saw value in the mind, believing that clear thinking was the key to understanding the wider world.

In the 21st century, it's obvious that our culture emphasizes the crotch over the mind. What are the "hot topics" glut our headlines and dominate our conversations? It's sex. Sex is inescapable today. Our media choices are drenched with it and our politics are obsessed with it. That's why the "pelvic issues" are getting so much attention. Homosexuality, transsexuality, abortion, birth control are the focii of recent political protests, where adults will actually dress up as genitals—dress up as genitals!—in order to demand… what exactly? More availability for consequence-free sexual experiences?

What does it mean to be civilized? It isn't our infrastructure or our technology that civilizes us. It isn't creating new ways to manufacture things or making it easier to do the mundane tasks life requires. For when we talk of someone being civil, we are commenting on the character of the individual in question. If someone is insulting or brutish, that person is uncivil. They would rather lash out with their feelings than recognize the humanity of the other individual. The three R's of reason, regard, and reverence are what make us human and distinguish us from animals.

Thus, civilization is predicated on the fact that human beings are not slaves to their natural impulses. Just because one feels an urge to copulate doesn't mean one should immediately attempt to do so any more than just because one passes by some delectable morsel one should immediately attempt to eat it. It may not be yours. It may not be the right time, perhaps a business meeting where the food is laid out for the meeting's conclusion or a wedding where the bride and groom should be served first. To give license to on one's base desires is to show contempt for others and to be uncivil.


Identity from a Crotch-Driven Culture

However, in our crotch-driven culture, we now seek to celebrate the base desires. In fact, people use their base desires as their primary form of identity. A person will say he or she identifies as homosexual heterosexual, bisexual, transsexual, or whatever the most recently vogue sexual predilection may be. My question is why in the world would anyone want to have their bedroom activities be highlighted as their primary attribute? How is that a good thing for elevating the understanding of ourselves as human beings?

All of this doesn't mean I am taking some kind of "don't ask, don't tell" approach. What I'm saying is that previous generations saw sexual drives and desires as things people did, not who people were. The concept of homosexuality as it is used today is actually very new. It shifts the focus from the act to the attraction itself. But doing so tells us nothing of the rightness or wrongness of homosexual acts. There are base desires that people have where it may be sometimes wrong to act upon them (such as above) and other desires where it is always wrong to act upon them. Placing the emphasis upon the fact that one has the desire gives us no information as to whether one should act upon them or not. But we know that to be civilized would mean that one must be able to control oneself in spite of those desires.

To identify as homosexual or heterosexual or whatever strikes me as elevating the base instincts one has to a status they shouldn't occupy. Yet, that seems to be exactly what Pride parades, genital costumes, and such are seeking to promote. Why would you want me to think of the primary driver of your life as satiating an urge that most people accomplish in half an hour once or twice a week? It is decivilizing. (And if your first reaction to that prior sentence is to mock the frequency or duration, then you're proving my point—that's the reaction of pre-pubescent boys, not thoughtful adults.)

I don't identify as heterosexual; I'm simply attracted to people of the opposite sex. I identify as a rational, civilized human being who will reserve the details of my most intimate moments for personal rather than public consumption. I seek to view other people in the same way. Those campaigning for the pelvic issues aren't advancing civilization, they're regressing from it.