The One Sexual Orientation No One Advocates For 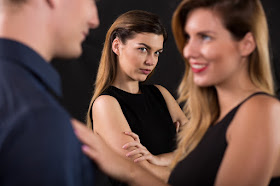 I recently wrote that today's western culture has become so craven we have elevated our sexual appetites above our desire for a civilized society. And I'm not simply talking about suggestive advertisements or sexual references in our entertainment. As I noted there, the "pelvic issues," (homosexuality, transgenderism, abortion) have consumed an inordinate amount of our politics and popular discussion.

The proponents of LGBT rights frame their demands as issues of civil rights.1 In so doing, they make the claim that sexual attraction is considered a viable way of understanding another individual, something that is "inherent and immutable."2 Such language implies sexual desires and preferences are what define you. They constitute an essential part of who you are.

If sexual orientation and desire are crucial to understanding who an individual is and if it is true that such desires are inherent and immutable as the HRC's definition states, then all sexual orientations should be accepted and championed equally. But there's one sexual orientation I've not heard any of the pro-LGBT groups bolster and that is the occuposexual.

What is an occuposexual? You won't find it by Googling the word, since I just coined the term myself, but the orientation has a long history and is well-represented online. An occuposexual is someone who is sexually attracted to those already committed to another in a relationship. They are drawn to people who are already relationally occupied.

Before you dismiss this as not a real sexual orientation, you should look at the facts. Occuposexual orientation is real. Dr. Valerie Golden wrote in Psychology Today how recent studies have found "90 percent of single women were interested in a man who they believed was taken, while a mere 59 percent wanted him when told he was single." Certainly, the attraction would differ in degree and not all those women would act on their desires, but Alfred Kinsey's heterosexual/homosexual scale makes the same distinctions.3 This scale was also used to justify the "normalcy" of homosexual desires.


The Desire of Occuposexuals is Like Any Other Sexual Desire

Occuposexuals themselves have written about their desires, using language that sounds just the same as other sexual orientations. In this article entitled "I am Dating a Married Man", a twenty-something woman admits that she is simply attracted to married men. She explains her attraction is because "he's already involved with somebody else. In many cases, the Other Woman wouldn't be turned on by the guy if he wasn't. The fact that he's ‘taken' is proof of his desirability. The fact that another woman's husband wants her is proof of hers."4 Everyone from news outlets to Women's' Health Magazine has articles on the subject.

You may be quick to dismiss such an orientation as regular people who just aren't in control of their predilections. But how can you make that judgment? We know occuposexuality occurs in nature, as the article Infidelity Common Among Birds and Mammals, Experts Say clearly proves. Like the lady in the ‘I am Dating a Married Man" article explains, she knows that what she's doing isn't right, but she can't help herself. She's gone from one married man to another even though she knows it's wrong and it's trouble. In fact, in any type of objection that occuposexuality is somehow different from other sexual orientations fails by using the very same arguments the pro-homosexual community has used for decades in their advocacy.


So Why Is No One Championing the Occuposexual?

You may notice something unique, though, about their occuposexual. While groups like GLAAD and HRC are quick to demand rights for their constituencies, who they classify as "sexual minorities," no one is championing the occuposexual's rights to come out of the closet, to express their sexuality as they feel it, or really to even exist. Why not? The answer is easy. No one wants their significant other snatched from them by an occuposexual. They believe even though this is a sexual desire, one that's real, it is ultimately a desire and the occuposexual doesn't have to act upon it. They believe the person who holds that desire is responsible for his or her actions, even if that means seeking out help to properly deal with those inherent desires. Plus, occuposexuality will never be a big winner in the public's opinion.

But all of this makes my point. It's easy to justify desires when others cannot see the serious impact they have on a society. It's easy to assert the idea that sexual orientation is a fundamental function of who you are and not a secondary function. I say the human being is not whatever his or her sexual attractions may be. Human beings are too valuable to be reduced to their sexual desires. That's true for the occuposexual as well as any other form of sexual orientation. By elevating sexual identity to something inherent and immutable, one must make room for the occuposexual to find his or her fulfillment in sexual expression, too. Are you willing to give up your mate or are you just a bigoted occupophobe?