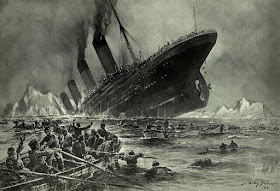 "No one need fear that the Titanic will go down. Even though all her former compartments and bulkheads were stove in by the iceberg, she would still float indefinitely. She might go down a little at the bow, but she would float. I am free to say that no matter how bad the collision with an iceberg, the Titanic would float. She is an unsinkable ship." 1

Those words were offered by P.A.S. Franklin, Vice President of the International Mercantile Marine on the morning of April 15, after reports started coming in that the R.M.S. Titanic stuck an iceberg and was in need of rescue. Franklin assured the public that would be rescued. Of course, his assumption was completely wrong, as was the Titanic's captain who proceeded at full speed even though the Titanic had received six separate warnings of heavy ice before she was struck. Captain Smith, a seasoned leader, knew of the ice in the water before he left port.2 Both men were assuming future success on their past history. Smith even previously said that modern shipbuilding had "gone beyond" any condition causing a ship to sink. 3


Christianity is What Shaped These Societies

I offer the example of the Titanic not to berate the assumptions of the men above, but that they should serve as a caution. Today, we recognize such statements as hubris, perhaps even ridiculous but hindsight is easy. When I read things like Phil Zuckerman's claim that secular societies fare better than religious ones, I have to shake my head. Zuckerman offers several statistics, both on a state level within the U.S. and on a global scale comparing 'secular' nations to those whose citizens are religiously engaged and concludes that on many different benchmarks, such as economic indicators and reported levels of happiness, the secular nations are better. Scandinavian countries are held high in Zuckerman's writings as prime examples of secular nations. While that may be a debatable point, I will grant that for all practical purposes, the Scandinavian nations have a dominant secular population.

I've already discussed the first problem with the claim: what counts as 'better?' Today, I want to take on the heart of the matter, though. These secular nations (and the less religious states Zuckerman offers) are as successful as they are not because they've turned secular, but because of the centuries of Christian history and values that have shaped them into what they are today. It is the Christian tradition that has made the Scandinavian countries value all people as equals. Before Christianity, the Viking culture saw pillaging monasteries of far off countries acceptable and slavery was part of the business. It took some 150-250 years for the Scandinavian nations to convert to Christianity, and during that time the culture gradually changed to adopt Christian principles.4

The length of time it takes to change a culture fits appropriately with sociologist Robert Woodberry's findings on how Christian missionaries positively affected third world nations. What makes his study so significant is that Woodberry has researched his claim so carefully no critic can find a hole in it. You can read more here, but as Christianity Today summarized:

In short: Want a blossoming democracy today? The solution is simple—if you have a time machine: Send a 19th-century missionary.5

Zuckerman has offered his criteria for "better" by using measures like a nation's democracy, the equality of women, or its level of literacy. But these are results of the Christian worldview. So are education, the value for children and orphans, and the idea that all men are created equal. The secular nations that Zuckerman highlights have had a long history of Christianity as their primary societal driver. There simply has not been enough time for secular values that Christians warn of to do the damage they can ultimately inflict.

Once the Titanic struck the iceberg, it didn't sink right away. It took over two hours before she went down and in the immediate minutes after the hit, I would imagine certain crew would still have voiced the same hope as P.A.S. Franklin. Their assumptions were equally wrong. I've shown how the so-call model secular nations have devalued life already. The question for us today is where will this new secularism take us when enough time has passed for the culture to be drowning in it?