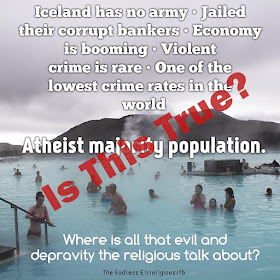 Yesterday I wrote about a spate of memes on the Internet that assert countries with atheist majorities are faring better than those whose cultures reflect a religious majority. In that article, I distinguished that the concept of "better" is used pretty loosely, as suicides and the value of life itself seems to be much lower in Scandinavian counties offered as examples of secular states. Today, I'd like to approach some of the other problems with the assertion to provide a fuller response to those who would believe such hype.


Secularism is not Atheism

It must be mentioned at the outset that many of the memes out there are not accurate in their presentation of the facts. For example, the Iceland meme defines Iceland as an "Atheist majority population." According to the CIA World Factbook, the population of Iceland is actually "Evangelical Lutheran Church of Iceland (official) 73.8%, Roman Catholic 3.6%, Reykjavik Free Church 2.9%, Hafnarfjorour Free Church 2%, The Independent Congregation 1%, other religions 3.9% (includes Pentecostal and Asatru Association), none 5.6%, other or unspecified 7.2% (2015 est.)."1 Taking the Nones and the unspecified together, it means 12.8% of Iceland's nearly 332,000 citizens don't identify with any religious group.  That isn't even close to a majority.

The question changes if one makes a distinction between a secular culture and an atheist culture. Even sociologist Phil Zuckerman, from whose research most of these ideas were taken, tried to be a bit more careful in his definitions, defining an atheist as "someone who doesn't believe in God and/or finds the very concept of God meaningless or incoherent" and a secular person as "someone who is non-religious, irreligious, or generally uninterested in, indifferent to, or oblivious to religious beliefs, activities, and organizations."2 As Zuckerman rightly notes, there are a wide range of beliefs, self-identifications, and even overlapping views. So, while Iceland may have a population that is uninterested in religious beliefs (we don't know if that's the case as no statistics are provided in the meme), it cannot be claimed to be atheist.

In another article written for Psychology Today, Zuckerman claims "those democratic nations today that are the most secular, such as Scandinavia, Japan, Australia, the Netherlands, etc., are faring much better on nearly every single indicator of well-being imaginable than the most religious nations on earth today such as Colombia, Jamaica, El Salvador, Yemen, Malawi, Pakistan, the Philippines, etc."3 Interestingly, why did Zuckerman include the qualifier "democratic" in his assessment of secular nations but not of the religious ones? What about the human rights of the citizens of China or North Korea? Here, he doesn't say, but he does mention it in his other work. There, Zuckerman admits such nations "do miserably on various indicators of societal well-being" but he blames this on the dictatorships themselves.4 He may very well be right, but then what to do with including nations like Colombia and Yemen in the list above?

Also, while Zuckerman's article is written to counter what he says is a charge by "religious conservatives," the claim is too broad.  I don't claim that being religious or a belief in God is all one needs for a society to thrive. It is specifically Christian ethics and a society influenced by a Christian worldview that we must discuss.  Islamic nations have a whole host of other problems they must deal with.

In the next article, I focus specifically on the conclusion offered by Zuckerman that countries like the Scandinavian nations are faring better due to their secularism. For now, know that such claims rely more on assumption than fact.