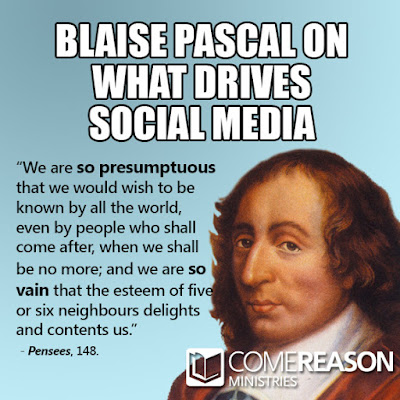 I love history. I love to look at ancient edifices or read about past civilizations and try to really get into the minds of those who have come before us. It can seem we're so very different from the Romans or Greeks or Egyptians. We're so much smarter today, after all look at how much our advancements have given us! Such a view is really superficial. Those people were people and their motivations were by and large the same ones we have today. Certainly, they are packaged differently, but it's striking just how much humanity doesn't change from age to age.

Take the issue of self-perception. All people are worried how others perceive them and a significant number elevate the perceptions of others over everything else. Perhaps it was whispers between friends in ages past; today, it's counting comments on Facebook. The drive is the same, though. We want people to think more of us.

As a case in point, look at the writings of Blaise Pascal. His Pensées, or Reflections, was written over 350 year ago, before his death in 1662. Yet, one line neatly sums up the very modern drive of young people fishing for Instagram likes or YouTube fame. He writes, "We are so presumptuous that we would like to be known throughout the world, even by people who shall come when we are no more. And we are so vain that the esteem of five or six people close to us pleases and satisfies us." (#152)1

Pascal even expanded on this to say how much the views of others matter more to us than our own reality. Tell me if these sounds like how so many treat their social media posts today:


We are not satisfied with the life we have in ourselves and in our own being; we want to live an imaginary life in the mind of others, and for this purpose we endeavor to make an impression. We labor constantly to embellish and preserve this imaginary being, and neglect the real one. And if we are calm, or generous, or faithful, we are eager to make it known, so as to attach these virtues to our other being. (#653)

Of course, cultivating the imaginary being online means being something other than honest; making the division more pronounced:


We would rather separate them from ourselves to unite them to the other. We would willingly be cowards to acquire the reputation for being brave. This is a great sign of our own being's nothingness, of not being satisfied with the one without the other, and of renouncing the one for the other! For whoever would not die to save his honor would be infamous. (#653)2

That sounds pretty modern, doesn't it?


We Still Abdicate Our Need for Right-Thinking

Pascal was very aware of the human condition. He knew that while people worry about how others perceive them, such worries are vanity. They don't mean a lot. More important is for one to think well. A strong thinker will examine him or herself as well as the ideas with which he comes in contact:


Man is obviously made to think. It is his whole dignity and his whole merit; and his whole duty is to think as he ought. Now, the order of thought is to begin with self, and with its Author and its end.

Now, of what does the world think? Never of this, but of dancing, playing the lute, singing, making verses, running at the ring, etc., fighting, making oneself king, without thinking what it is to be a king and what to be a man. (#513)3

…Our minds and feelings are improved by conversation; our minds and feelings are corrupted by conversation. Thus good or bad society improves or corrupts them. It is, then, all-important to know how to choose in order to improve and not to corrupt them. But we cannot make this choice if we have not already improved and not corrupted them. Thus a circle is formed, and they are fortunate who escape it. (#659)4

I use social media a lot and I think its great in its place. However, I also try to set aside a certain amount of time every day to be off social media and read or engage others with ideas that will stimulate me to think better. I want to grow better personally, and I'm really not that interested in posting how well I'm doing so others may see. That doesn't mean there's no place for social media. If you're using GoodReads or something similar to spur conversation with others or hold one another accountable for your book reading, that's a great thing. But I hope you would be encouraged to be a little bit intentional in mental self-improvement, as intentional as you may be in the pictures and posts you share.

Proper thinking starts not with how others think of you but an honest self-examination. If you can identify your own biases and predispositions you are in much better shape to understand others' points of view. You can see things like sources are not necessarily less credible simply because they lived centuries or even a couple of millennia before us. You will be more open to an honest exchange of ideas. You won't be as susceptible to being led by feelings that can be manipulated and false. 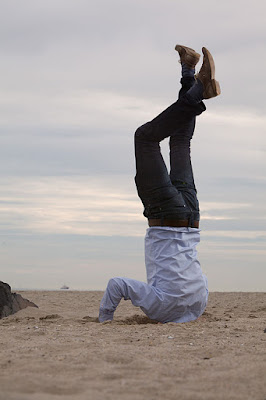