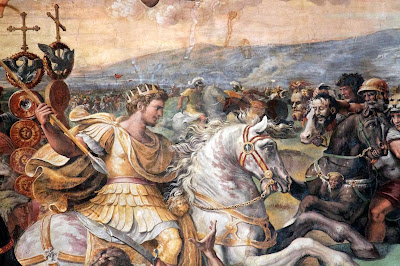 Today is the anniversary of the Battle of Milvian Bridge. This was the historic turning point that allowed Constantine to command Rome.  It was also where Constantine first fought under a Christian banner, thus setting the stage for Christianity to become legal across the Roman empire.

Of course, this raises as many questions as it answers as the video below shows.  However, as Christians we should at least understand our heritage—warts and all—in order to better minister in the name of Jesus Christ.

For a bit more on Milvian Bridge Day, see http://bit.ly/bDYNiR.


Thanks to Anton and the Religion News Blog for the tip.
Posted by Lenny Esposito at 8:03 AM
Labels: Christianity, Constantine, history, holidays