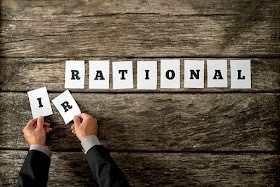 Recently through my social media channels, I linked to this article on how assisted suicide laws in Belgium were leveraged to allow kids as young as nine and eleven to take their own lives. It's dangerous that children who don't have either the experience or the maturity to know the true value of life are given the opportunity to end it, even though they may be sick. I said so in my post, But that isn't the point of this article.

When I posted the piece on the Come Reason Facebook page, I received a response from Scott Womack pushing back against my statement that the news was disturbing. Never before have I had a conversation where it ended with my interlocutor telling me I was wrong for being logical and consistent! I've reproduced the conversation below, but you may always read the original here.

“The eldest of the three was a 17-year-old suffering from muscular dystrophy; the other two were 9 and 11. The 9-year-old had a brain tumor and the 11-year-old had cystic fibrosis.”

Human rights > cultural sensitivities.
Come Reason Ministries: Right. But we don't know if their conditions were terminal or not. Can a nine year old really make an informed decision about such grave matters? We recognize they are too inexperienced when it comes to alcohol or sex. Suicide?
Scott W: Can you make an informed decision concerning someone else’s quality of life? Isn’t that overreaching?
Come Reason Ministries: Not when it's protective. "First do no harm" state the Hippocratic oath.
Scott W: The Hippocratic oath also swears by Apollo the physician.
Come Reason Ministries: So what?
Scott W: So it’s a bit dated for our century.

The oath has also been updated, also the oath is ceremonial not obligatory.
Come Reason Ministries: But that principle is neither dated nor irrelevant. It answers your objection.
Scott W: Attached is a link to the modern successor of the oath.
BIOEDGE.ORG BioEdge: New Hippocratic Oath for doctors approved
Come Reason Ministries: Again, you're arguing beside the point. You asked, "Can you make an informed decision concerning someone else’s quality of life? Isn’t that overreaching?" My answer is "Yes, I can." Look at the transgender push for transitioning prepubescent children. Study after study shows that given time these kids will accept their biological sex over time AND that transitioning offers no improvement for risk of suicide. Therefore, I can safely say that even though the 9 and 11 year olds FEEL that their quality of life is bad and they WANT to transition, it would be the wrong course of action.

Suicide has no take-backs.
Scott W: Luckily you’re not in charge and No you don’t have the right or ability to make those decisions for other people.

In addition child sex trafficking is illegal.
Come Reason Ministries: Why is child sex trafficking illegal?
Scott W: Because secular law says so.
Come Reason Ministries: If that's all you have, it's a terrible reason. Laws are wrong all the time. Even MLK recognized this. I think you know there's more to those laws than "because the government says so."
Scott W: There’s more to the secular laws because secular authorities have the ability to back it up.

Indeed Religious law Often serves as justification
Come Reason Ministries: So your answer is argumentum ad baculum? Might makes right in this case?
Scott W: What is your answer, religious law prevents child sex trafficking?
Scott W: Of course Law doesn’t stop anyone. The law simply lays out the consequences if your caught.

So yes might (The ability to cage monsters) does to the best of its ability make right.

Whereas you offer salvation to convicts convicted of horrible things, in order to make things right.
Come Reason Ministries: Might makes right. If one follows your stance consistently, then because the government has the might to separate families at the border, it is OK to do so.

You can either base your laws on power or on principle. Totalitarian regimes do the former.

Reasonable people do the latter. Pointing to fallacies is by definition unreasonable.

BTW, on the salvation comment, that's the second time you've yelled "Squirrel!" during our discussion. Red herrings are just as much of a logical fallacy as argumentum ad baculum.
Scott W: You seem to place a value on mental consistency that I don’t share or believe is possible.

You are just as irrational a capable of biases as I am.

I believe consistent people watch themselves too closely and likely suffer from a impairment in seeing and judging reality.

In this case the reality of human rights which were given by constitutional law not God.

Yours irrationality is performing mental gymnastics in order for your total worldview to make sense.

There’s a world of people you’ve missed in your equations between your totalitarian regimes and “rational” people.
Come Reason Ministries: I think we can leave it at that. Thanks so much for the discussion, Scott!

I must say, at least Scott is honest! Of course, he's completely misunderstood Chesterton (that would be for another post), but to think that if 100% complete mental consistency isn't possible we should give upon the endeavor altogether is, well, breath-taking. What do you think? Let me know in the comments below.
Lenny Esposito at 1:03 PM