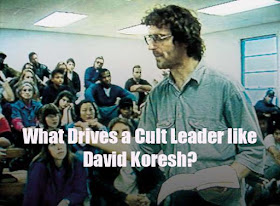 Twenty-five years ago, the U.S. Government had surrounded the compound of David Koresh and the Branch Davidians, embroiled in a stand-off that would last 51 days and tragically ended in gunfire with 75 of the 84 people inside dead, including children.

I was recently interviewed by Brody Harness for a research project he was doing on the siege and I thought these questions were very poignant and valuable to better understand the cult leader and others like him. Here's a copy of that interview.


Briefly, the Branch Davidians were a group of religious believers whose version of biblical theology was explicated by David Koresh. Many of their important beliefs, and the reason they lived communally at a compound, Mt. Carmel, centered on Koresh's interpretation of the Book of Revelation. Can you shed light on this group directly (or perhaps generally) based on similar groups who focus on Revelations?

The Branch Davidians were an offshoot of the Seventh-Day Adventist movement. The emphasis on the Book of Revelation comes from their focus on the end times scenarios. The term “Adventist” stems from the word advent which refers to the coming of Christ. Just as we celebrate Christ's first coming before Christmas and call it the season of advent, advent can also refer to His second coming. Most modern Adventist groups, such as the Seventh-Day Adventists and the Jehovah's Witnesses find their origin in an early 1800's preacher named William Miller, who preached that Jesus would return in 1844. He became very popular and gained a wide following. The subsequent failure of Miller's prediction is known as The Great Disappointment.

When Jesus didn't return as expected, the “Millerites” (who preferred the name Adventists) started coming up with alternate explanations, such as Jesus had returned invisibly (Jehovah's Witnesses) or Jesus came into the heavenly Holy of Holies and ended the age of grace, and is now beginning his period of Investigative Judgment (Seventh-Day Adventists).

The Branch Davidians splintered off the SDA back in the 1930s when a leading Adventist in the Los Angeles area, Victor Houteff, began teaching the church wasn't being holy enough. David Koresh's mother was a member of a Texas SDA church and Koresh himself was also a member for a while, before being attracted to the Davidian sect. According to Apologetics Index,  Koresh claimed to be God's agent, (and ultimately taught his followers that he was divine) and instructed those that followed him to preparing themselves for Jesus's return.

Part of the governments “case” for treating the Branch Davidians as they did was the fact that David Koresh was legally married to a cult member when she was just 14 years old, and that he was fathering children with the wives of the other adult males, while banning all other sexual relationships within the church. The government felt children were endangered at Mt. Carmel by these practices which did not appear to be the case according to some sources close to the investigation; however, it did appear to reflect and elevate Koresh's psychological hold on the group. Can you discuss some of the dynamics of sex/family/religion practices? (Again, either specifically with the Branch Davidians, or generally in cults.)

Sex drove a lot of Koresh's desires. Even in the mid 1980s, Koresh began taking on multiple wives as he also started establishing himself as a leader within the Davidian movement. He was a polygamist and saw himself as taking a role akin to David in the Old Testament establishing the Davidic Kingdom of Israel (thus the Davidians portion of the name.)

Since David had multiple wives in the Old Testament, Koresh felt that justified him to also have multiple wives.  Of course, as his power and following grew, he became more and more self-absorbed, something that is typical of cult leaders. His doctrines “departed radically from the essential doctrines of the Christian faith”1 and he demanded total control over his followers, cutting off outside ties and subjecting them to various physical and mental abuses.2

There was a general belief by the FBI and ATF that the Branch Davidians had a suicide pact and this was part of the federal government's decision making process which led to a military rather than law enforcement approach with the Branch Davidians. From what you know, was this assumption rational? Would it have been more rational in the 1993?

There are two pieces that powered the concern by the authorities at the standoff. The first is that David Koresh had a known history of violence, since he and some of his early followers took control of the Davidian compound in a gunfight with then-leader George Roden. But the biggest spectre in everyone's mind was the Jonestown Massacre of 1978. There, another charismatic leader, Jim Jones, took a large group of followers from California to the jungles of Guyana and created a commune. He ultimately convinced his followers to commit suicide by drinking cyanide placed in Kool-Aid. Those that didn't or were too young were forcibly given the poison.

The loss of those 908 people, along with the prior shooting of U.S congressman Leo Ryan who sought to investigate Jones' alleged human rights abuses gave the public grave concern that a similar event would take place in Waco.

I don't think we are any more or less likely today to come to a different conclusion. Religiously motivated actions have taken on a deeper suspicion in our culture. The powers that be may not jump immediately to a suicide cult assumption; I believe the suspicion would still exist. It is the aftermath and criticism of the Waco siege itself that tempers actions now.

When the government attacked, surrounded, and eventually destroyed the compound in 1993, the Branch Davidians interpreted all of the government's aggression as fulfillment of prophecy. Koresh probably contributed to the destruction of his community by insisting that they were being “tested” and if they left the compound they would lose their place in the kingdom to come. Koresh also provoked the ATF and FBI by repeatedly promising and stalling surrender to complete writing his own revelation which would be released publically. Is there a psychological profile, maybe narcissism or delusions of grandeur, which characterizes charismatic leaders like Koresh?

Absolutely. Jim Jones, David Koresh, L. Ron Hubbard, David Miscavige, and even Joseph Smith all exhibit this kind of self-absorption. In all these cases, you have a single individual who tells others that he alone has the true and secret knowledge of God/salvation/eternity and everyone else needs to listen to him. As he gains adherents and adulation, it feeds his narcissism and for most groups one can see their doctrine devolve more and more.  With all the men above, their paranoia and desire for control escalated as well.

Finally, do you have thoughts about government (law enforcement) interference with the free practice of religion –like the Branch Davidians, or polygamists or other cults?
All rights have limits. Everyone recognizes one's right to free speech, but you cannot yell “fire” in a crowded movie house. Similarly, one's right to practice the freedom to worship does not include the physical abuse of children or child rape. The difficulty is in finding where that line begins and ends.
We all agree that keeping thirteen children half-starved in a shack with some chained to their beds is no longer simply exercising one's freedom of religion, but is homeschooling abuse? Is corporal punishment abuse? The questions get complicated pretty quickly.

For the most port, the government has given the benefit of the doubt to the religious organizations. Scientology is a good example of a modern day American cult who engages in psychological techniques and even imprisonment of its disobedient members that the government has not interfered with.

The big thing to remember in Waco, Jonestown, and other cult situations is that these are fringe groups that were cults in both the religious and the sociological definitions. Those definitions are important, too, for one can be a cult sociologically but not have a religious basis. Charles Manson and the Manson family would be an example of a non-religious cult. Of course Manson used the Bible to try and justify his views, but he also used the Beatles and his followers were more concerned about race relations than become God's chosen.

Sociological cult leaders will use religion simply because it is easier to talk of mysteries where they can give their “inside knowledge” that gullible people will accept. Even Hitler used religion as a motivator.

For more on the making of a religious cult, see my articles:
Thanks for the interview! Let me know if I can be of any more help.