Religious Symbols, Public Land, and the Charge of Offense 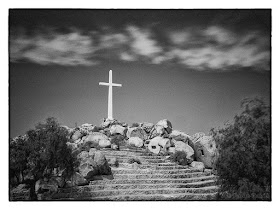 Is a cross an offensive object and if it is, in what way is it offensive? In today's over-sensitive culture, causing offense is one of the worst things one can do. With charges of microaggressions and trigger warnings now the norm on college campuses, we've moved to a surreal understanding of what is deemed proper in polite society. Still, does a cross on a city-owned hilltop in and of itself cause offense?

A couple of years ago, I engaged in a discussion on the radio with the lawyer from the Americans United for Separation of Church and State who had threatened the city with legal action because a 110 year old cross sat atop publicly owned property. The hilltop, known to local residents as Mount Rubidoux, had been owned by the family of Frank Augustus Miller, one of the influential citizens in the young California community. Miller was a fan of California history and mission-revival architecture. Miller built the Mission Inn in downtown Riverside and placed the cross atop Mt. Rubidoux to honor Father Junipero Serra along with a plaque explaining the same. The monument was unveiled by President William Howard Taft in 1909.1 After Miller's passing, his family donated Mt. Rubidoux to the city, as a gift for the community to enjoy.


How Does Offense Disappear with Ownership?

I offer this background to show that the primary purpose of the cross was recognition of a historical figure, father Junipero Serra. Yet, the Americans United for Separation of Church and State (AU) wanted it taken down. In the radio interview, AU associate legal director Alex J. Luchenitser claimed the cross was considered offensive. "We received a complaint by a local resident who was deeply troubled by the cross." It was troubling for this person to look up at the cross every day and see what he considered an endorsement of a specific religion. The supposed complainant was "deeply troubled" to use Luchenitser's own words.

I could imagine Jewish people looking over a monument with a Nazi swastika being offended at seeing that every day. I could understand it if a city left up signs in front of drinking fountains that said "Whites only" as being offensive. I don't understand how this cross fits in the same category, yet I will take Luchenitser at his word.

My problem, then, is with the solution that Luchenitser offered: if the city would simply sell the cross monument and the land surrounding it to a private entity, the problem will be solved; the cross would no longer be offensive. Now, how does that work? I'm certain that the Jewish citizen would continue to be offended at the Nazi insignia prominently displayed no matter who owned the thing. Similarly, selling the drinking fountain and the building to which its attached would in no way diminish the offense of a "Whites only" sign. This resident that initially complained to the AU, won't he or she still wake up every morning and see that cross in the same place as before? Why is that person no longer offended?

Ultimately, the solution that Luchenitser offers proves the offense objection isn't sincere. Either the cross is an offensive symbol or it isn't. What Luchenitser and his ilk at the Americans United for Separation of Church and State really want is to try and erase any and all reminders that religious motivations factored into the founding of our nation and our local communities. That's the real goal of such frivolous lawsuits. Luchenitser also argued that such a display is tantamount to the government proselytizing. That's a separate argument that can be answered at a later time. My point for today is that any claim that a cross would be removed because it is offensive should be rejected.

In order to settle the dispute and not tie up hundreds of thousands of dollars in legal costs, the city of Riverside chose to sell the cross to a private organization, the Friends of Mt. Rubidoux. It stands in the same spot and is still visible for miles around. It is either a beacon of offense (and if so, the city is complicit in allowing such an offensive symbol to remain) or it is what it always has been: a symbol recognizing the role that Christianity played in settling Riverside and the state of California.