Censorship is Alive and Well in the Newsroom

This morning, the Los Angeles Times carried a front-page story about a controversial political battle that was fueled by an undercover video. But it wasn't the undercover video of a Planned Parenthood senior official discussing how Planned Parenthood is involved in harvesting and selling baby organs. Instead, the editors at the Times gave 1,028 words and premium front page status to the coverage of some middle-aged men chasing other away from their favorite surfing spot.1 Even after two full days of triggering an avalanche social media outrage which prompted both federal and state officials to begin investigating the abortion organization, coverage of Planned Parenthood's hideous practices is nowhere to be found in the Times. 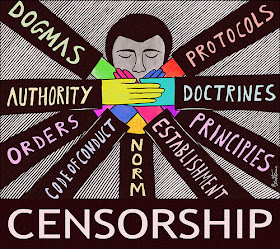 Of course the LAT is not the only media outlet that purports itself to be a news organization but is censoring this story. Mollie Hemingway over at the Federalist has been monitoring media outlets for years on their selective bias against stories that bring the horror of abortion to light. Today, she wrote about the paltry media coverage of the Planned Parenthood scandal from most of the major media organizations. In her article, she shows just how slow these outlets were to cover the story, how few of them gave any mention to it at all, and how most who did, did so in order to help the PR push of Planned Parenthood, even to the point of copying their talking points verbatim!2


Watchdog of Justice, Who Keeps Their Eye on You?

None of this was unexpected. Two years ago, the Kermit Gosnell case checked off absolutely every requirement a news outlet would look for to warrant full coverage and smashing ratings, yet is was conspicuously absent from nearly all of them. Now, the harvesting of baby organs story is again being censored. Why? Because the idea of dispassionately reporting the news isn't the overriding value for those who claim to run news organizations anymore. It isn't even ratings, although ratings matter. It's simply ideology. Ideology is king and one cannot put forth a story that may break a scandal against something like abortion.

To underscore the pint, just as the fetal organ story was breaking, my friend Sean McDowell released a short YouTube clip where he tells of his almost interview on CNN. The organization called Sean because they were looking for an opposing voice on the topic of transgenderism. He recounts the producer asking him for his specific position on transgenderism.3 Sean replied, "My position is this is a complicated issue. We need to have compassion, we need to follow the science, and we need to settle this issue carefully." The producer them paused a moment, looked a Sean and said "You know, you're much too compassionate. My director will get upset if I have you call into this show!" upon finding out that CNN contacted the Southern Baptists to try and find a person who would state on-air that transgenderism "is wrong, sinful, and you're going to Hell!" McDowell refused to do so and so CNN turned to someone from ChurchMilitant.com to be the radical voice the so-called objective news show could carve apart like a sacrificial cow to make themselves look balanced an sane. No one can call this objective reporting and still be considered sane.

It's been obvious for years that "reality" television is nothing of the kind. They are formulated, staged, scripted, and edited to get the biggest reaction out of the audience possible. The newsroom is the next reality television. They are simply no longer trustworthy. It's no surprise that Pew Research just reported more people are getting their news from Facebook and Twitter than watching it on television or reading a newspaper or magazine. 4

Mainstream television and print journalism has died. Edmund Burke's Fourth Estate no longer exists; we only see the estate sale with ideologues pawing through its previously grand hallways and closets, selling both its duty and its good name for ten cents on the dollar.