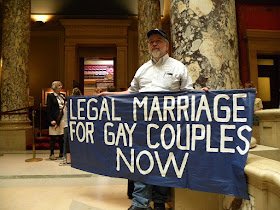 The issue of what marriage is who should be allowed to marry is making headlines around the world. With the homosexual lobby pushing for states to recognize same-sex marriage, it becomes more important than ever to understand just what marriage means and who has control over its definition.

In this video, Lenny explains that marriage stems not from any law or court decision, but from the same source as human equality: natural law. Thus marriage, like human equality, cannot be redefined.