The Absurdity of Describing Oneself as an Agnostic Atheist

Imagine meeting a man who traveled to your town from a far country after his nation was destroyed by a war. All the records of civil ceremonies had been wiped out. In talking with this gentleman, you ask if he has a wife. He answers, "I don't know if I am currently married, but I know that I'm a bachelor!" 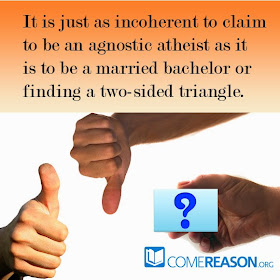 You'd probably look at them with more than a bit of confusion. "How can that be?" you ask.

He replies, "Well, I may or may not have gone through a marriage ceremony in my home country. However, there's no way to tell, since all the records are destroyed. However, you don't see me with a wife now, I like to date a lot, and I don't want to answer to a wife or have to check in every night. Therefore, I've chosen to be a bachelor, but I may be married, too."

He replies, "No, I am a bachelor who is open to the fact that I may also be married."

You try to persist. "The word 'bachelor' refers to whether or not you have committed to another person in marriage. That either happened or it didn't. Claiming that you may be a married bachelor is just as absurd as saying you may have found a triangle with only two sides! I can tell you right now that such a triangle doesn't exist and neither does a married bachelor. Your standing regarding marriage defines whether or not you're a bachelor."

While the above conversation seems farcical, I have been running into a similar issue recently with people who describe themselves as "agnostic atheists." As a Christian, I describe myself as a theist. A theist is someone who believes in God. There are many types of theists (Jews, Muslims, Deists, etc.) They all fall within the category of someone who holds that God exists. Being a theist doesn't mean the person can argue for or even prove that God exists; it simply defines the fact that they believe God exists.

On the other end of the spectrum are atheists. The word means "One who denies or disbelieves the existence of a God" and, according to the Oxford English Dictionary, came from combining the word theist (belief in God) with the negative prefix "a-" meaning without1. So, "without " + "belief in God" = atheist. Simple, right?

But there is a third term that can be used to describe ones relation to a belief in God, and that's the word "agnostic." That word derives from the same "a-" (without) but the second word is gnosis, which is a Greek word for knowledge. So an agnostic means someone who is without knowledge on a topic or issue. If you don't know whether there's a God (or perhaps you don't care), you would be considered an agnostic.

Because the word agnostic simply means one who doesn't know, it is used in contexts other than God's existence. For example, as a hockey fan, I am agnostic towards which teams will play in the Super Bowl this year. I am not rooting for one over another, and I don't have any knowledge as to which ones stand the better chance. If my wife asks whether she should buy chicken sausage or turkey sausage at the store, I would tell her "it doesn't matter at all; I'm agnostic on that issue." However, if I have even a slight leaning towards one choice over the other, then I am no longer agnostic. My indifference is gone and I do have a belief, albeit a small one.

Thus the Oxford English Dictionary's primary definition of agnosticism reads, "A person who believes that nothing is known or can be known of immaterial things, especially of the existence or nature of God. Distinguished from atheist."2

Notice that even the OED states that the term agnostic is to distinguish lack of knowledge as to whether God exist as opposed to atheist which says one disbelieves in God's existence.  While I don't believe the OED is the end authority on this matter, philosophers have been using these terms in a similar way for many years as well. (The irony here is that Huxley coined the term agnostic by borrowing from Paul's speech about God in Acts 17:23)3.

So as more and more atheists describe themselves as "agnostic atheists," they are simply trying to claim too much.  Each of these terms describes a single state of belief: whether one believes in God, one doesn't believe in God, or one simply doesn't know whether God exists. It doesn't matter whether you can prove His existence or if you even care to. To be agnostic is to make a claim that distinguishes one from an atheist. It is just as incoherent to claim to be an agnostic atheist as it is to be a married bachelor or finding a two-sided triangle. Such contradictions don't demonstrate a value for rationalism but quite the reverse.