Tips for Sharing Your Faith #4 - Avoid Smokescreens and Dodges

There's an old saying that goes "Do not discuss politics or religion in general company."1 Within any conversation where the participants are passionate about their views, it is likely that emotions can get in the way. The talk gets heated and it degenerates to more seeking to wound the other person or simply trying to protect oneself. This next tip is so important, because it seeks to help you argue well. We will use a single topic to see how each dodge can play out, but this is just for example. Hopefully, you can recognize these and apply them to other discussions as well. 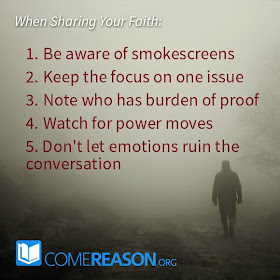 Let's say we are discussing why God is necessary for objective moral values and duties. I've argued here that objective morality requires God to ground its precepts. Perhaps I tweet this article and get several responses. Let's walk through our scenario and see how to deal with each.


1. Be aware of smokescreens

Many times if you raise a point that the other person cannot or doesn't want to answer, they will throw out a smokescreen. Smokescreens are questions or objections that are meant to a) take the pressure off them by bringing up some new subject or problem not related to the issue at hand or b) questions where the questioner isn't really interested in hearing the answer. So, for example, a person responded to my article by writing "Morals can't be grounded in an imaginary being... not grounded in Jesus any more than grounded in Santa." This response is clearly not dealing with the problem of morals being objective versus subjective. It's simply meant to inflame.
Therefore, Someone who wants to shout at you, ask questions but refuses to answer ones you present, or simply barrages you with a barrelful of issues is trying to create a smokescreen. Here's the takeaway:


2. Keep the focus on the issue at hand

The tactic of trying to get out of trouble by introducing a new subject is known as a "offering a red herring," an idea coined by William Cobbett, who wrote a story about a boy who drags the smelly fish away from a hare's trail in order to send the tracking dogs in the wrong direction2. In my post above, I used confederate money as an analogy to show why morality must be anchored in something bigger than just whatever people want to believe. I had another respondent who began to argue about the value of gold and the economics of the1860s versus today. These had nothing to do with my point, but were distractions. Similarly, you may get "well, if God is moral then why did He let all those people die in the (choose disaster of choice)?" But God's actions are a separate question from how we get meaningful morality. They are red herrings meant to lead you away from your point. Here's the key:


3. Note who has the burden of proof

Another dodge that can come up is when a person makes a charge and when you respond to that charge, he challenges you to prove your own position. For example, sometimes atheists simply dismiss my argument and state God is not necessary for morality to be real. At that point they've made an assertion, so it is incumbent upon them to back it up. I would ask something like, "How is it that moral laws are binding upon all of humanity and not merely a preference?" If the person replies with, "Well, atheists are more moral that other people" he's offered a red herring. This is why tip #2 is so important. The more questions you ask the less work you have to do. The objector should be able to provide reasons for his objection. The takeaway is:

One time I was walking down a street and noticed a man on a bench who was shouting about the Iran war to the crowd. He spoke in brave tones and seemed very confident. But some of the things he said were very simplistic. I asked him how Just War theory fits in with his position. He actually got off the bench, took me aside and said in a normal voice, "Yes, I know about Just War Theory. I'm a professor as the local college." I asked, "Well, we should talk about it since it isn't quite what you're shouting." He replied, "Well, I have to use rhetoric in order to get the attention of people walking by." I found such as statement educational. The man was intentionally misrepresenting a position to draw attention to himself, but the people wouldn't know because he'd never shout the nuances of the debate.

This is why students must be careful when arguing with their professors during class. It's important to try and be heard, but it's also important to realize that the dynamics are such where the prof may do whatever it takes to save face. The takeaway is:

Of all the tips I've presented, this one is probably the most important, since Christians are just as guilty of it as those they interact with. If your discussion with another person starts to turn where you can feel the blood rising in your face, it is probably time to take a break. As I said at the beginning, passionate beliefs can turn into more heated arguments. But this is exactly the wrong way to share your faith! Be firm in what you believe and don't let people abuse you, but you should never alienate the person because your emotions got the better of you. Take a break, ask to come back at a later time and finish the conversation. It's better to part ways and have the opportunity to be heard another time than it is to offend someone to the point where they will reject your message because they associate it with a vindictive messenger.