What Archaeology Can Tell Us About the Bible

Discovering long buried evidences of the past is exciting. I've had a couple of opportunities to visit places that were very old and see ruins that were put together thousands of years ago. It was amazing to think of the people who were building those structures and how they lived. 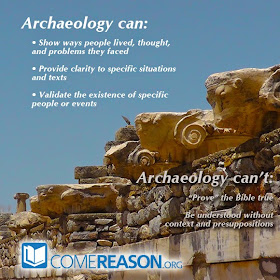 Because the Bible records events that also take place thousands of years ago, it seems that archaeology would be a natural way to investigate these stories. As archaeology has developed since the mid to late 1800's, the discipline has been used by some to corroborate the biblical accounts and by others to dismiss them. Therefore, I want to take a brief look at what archaeology can and cannot prove.


1. Archaeology Shows Ways People Lived, How They Thought, and Problems They Faced

Archaeology gives us a snapshot into the lives of people at a specific time. Sometimes a natural disaster, such as the eruption of Pompeii or the mudslide at Beit She'an freezes the area at a specific date. Other times, digs will uncover a culture that spans many years. However, by examining the houses, coins, pots and other materials, one can get a glimpse into the lives of those who lived in this period.

For example, many scholars of earlier times doubts that Moses would have been able to write the detailed laws that make up the Levitical system by 1400 BC until archaeologists found the Code of Hammuabi, which also contains many complex laws and predates Moses' writings by about 300 years.

Another benefit that archaeology provides is to clear up texts or customs that don't seem to make sense to us today. For example, in the book of Daniel, King Belshazzar becomes unnerved when a hand appears writing on the wall opposite him. He promises "the third highest position in the kingdom" to anyone who can read the text. This account was questioned because most ancient records showed Nabonidus as the king at this time. The offer of third highest ruler wasn't really understood, either, until the Cylinders of Nabonidus were found. There they say that while King Nabonidus was off fighting wars, his eldest son was named Belshazzar who he had left governing the city of Babylon. 1 Belshazzar's position of prince made him the second most powerful man in Babylon, so he could only offer another the third spot in the kingdom. The discovery of the cylinders clarified both Belshazzar's existence and the reason why he offered a third rulership to Daniel.


3. Archaeology Can Validate the Existence of Specific People or Events


Another thing that archaeology provides is verification that certain people, places, or events mentioned in the biblical text are real. As was shown in the example above, Belshazzar had to have existed since his father specifically mentioned him in his writings. Another person that skeptics accused of being non-existent was King David himself.2 Scholars like N.P. Lemche held that David was mythical and the biblical accounts were put together much later than the events they describe.

However, in 1993 at the site of the ancient city of Dan, archaeologists uncovered a stone engraved by an Aramaean king to commemorate his victory over the ancient Hebrews. (2 Kings 8-9). There, he boasts that he had defeated the king of "the House of David." As archaeologist Yosef Garfinkel states, "'House of David,' it means 'dynasty of David.' So we know that there was a guy called David, and he had a dynasty. Okay, so now this is absolutely clear that David is not a mythological figure. So the mythological paradigm collapsed in one moment."3 Other archaeological finds have confirmed the existence of Caiaphas and Pilate, the Jewish High Priest and Roman procurator who were responsible for putting Jesus to death.

These are just a few ways that archaeology helps bring clarity and support to the Biblical accounts. There are many more finds that I can mention, but these are illustrative of how archaeology has shown the stories told in the bible are rooted in history. Tomorrow, I'll look at what archaeology cannot achieve.