12 Years a Slave and a Different Perspective 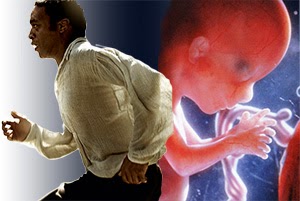 I recently watched the movie 12 Years a Slave.  It was intense, but extremely well done.  And, it was an accurate depiction of what it means to be at the pinnacle of human objectification.

Just as slavery in America, kidnapping, human trafficking, genocide, or eugenics, have a primary root in treating an individual as an object, those that have perpetrated these evils have chosen to, in whatever capacity, not treat them as being valuable in and of themselves.  When we see these sorts of injustices occur, at least on screen, there is something that tears us apart at the core of who we are.  That abysmal and ugly discomfort we get when we watch a movie like 12 Years a Slave is at full discord with something deep within us: the belief that human life is exceptionally invaluable.

Because human life is so invaluable, it is clearly wrong to exploit other human beings for our own potential financial gain or success.

There was only one other thing I found more disturbing than the objectification.  As I watched the film, it presented the varying sentiments concerning American slavery from all ends of the spectrum.  It showed the Deep South drenched in oppression and showed the North in an ideal and colorblind society.  What was peculiar wasn't necessarily these extremes, but the in-between, like a scene of kidnapping occurring right in Washington D.C. with the Capitol building close by in the background.  It was appalling to think that of all places such evil could happen, it occurred right under the nose of people that had the very power to do something about it.  The in-between was not just among the North and South.  The movie also depicted merciless slave owners and benevolent masters.  But unfortunately, even among the kindhearted, some chose to shun what was right and bury it deep within them.  That is what struck me with anger.  Some masters genuinely seemed, even if fleetingly, to come to grips with the full weight of their actions.  And yet, they still choose to treat others with depravity.  It was the silence among those who knew what was right and chose not to stand up for the right thing that tears at your soul in this film.  It is the benevolent master, who, though benevolent, still chooses to ignore exacting justice and keep a man a slave.  He ignores a woman being torn from her children and slaves sold naked.

Because human lives are at stake, it is clearly wrong to stay silent or permit treating human beings as objects – bartered or sold off for good.

The two affirming takeaways I got from the film made me question sentiments on the unborn.  I heard the analogues alongside of some popular arguments I’ve heard in favor of abortion:

“Women have a right to choose what happens to their own bodies.”
“I do what I want with my property.”

“If she is going to school or starting a career, she should not have to have the baby.”
“If I can’t have slaves, then what will I do?”

What is the unborn?  It is a human being, but it has no voice.  And in the spirit of the law, it is a disposable object.