For the Naturalist, Why Die for an Idea? 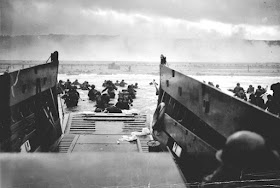 I'm writing this blog post on June 6, which is 72 years to the day that the Allied forces, led by the United States, invaded the beaches of Normandy, France. By all accounts, the Allied invasion proved to be the decisive turning point in the war, giving the Allies the upper hand. It also proved to be one of the costliest in terms of casualties with 2,500 Americans dying in the initial invasion, and most of those at Omaha beach. The British and Canadian troops saw about 1900 fatalities.1

It was no surprise that the invasion of a German stronghold would inflict heavy casualties. That's one reason why the invasion force was so large; the Allies knew they would lose a lot of men. But, why would those men—most of whom were less than 20 years old and had their entire lives ahead of them—assent to participate in something with such a high chance of death? How does this benefit them? Wouldn't being alive be better, even if it was alive with a dishonorable discharge or perhaps spending a few years in a military prison?

Freedom is the most common response given for the sacrifice made by these brave men. Both the veterans who survived the invasion and those who remember their deeds say they sacrificed their lives to allow others to live freely. Denis van den Brink, communications officer of the city of Carentan, France, a city that was an immediate beneficiary of the Allied efforts, put it well:


The allied army, more specifically, the American Army, they came to liberate, not to conquer. That's what it says in the Coleville cemetery, where 10,000 Americans are resting forever. That says it all, for the very first time in the history of mankind, they came to fight, die, win, victory, and then go home. That's the one and only example in the history of mankind and we had all these foreign Soldiers coming and dying and to fight for our land and then to free our land and then instead of staying they just went away. 2

How Does a Naturalist View of Life Make Sense of This?

The heroism of the soldiers at Normandy is beyond doubt. It is recognized by the theist and the atheist alike and I don't doubt the sincerity of either. However, how does a worldview such as naturalism make sense of fighting and dying for someone else for the sake of an idea? How does upholding the value of liberty, especially for a people you don't even know, become more valuable than life itself on a purely evolutionary paradigm? Why would freedom be so important?

I've heard some atheists try to explain away this difficulty by saying it is simply the law of reciprocity in action. You wouldn't want to be enslaved, so you act as you would have others act if you were the subjugated. I've shown why this claim fails before. If we evolved a sense of reciprocity, it may not benefit our survivability but it may in fact increase the number of individuals who die because they place themselves in life-threatening situations just because they see another person in a life-threatening situation. It would be very easy to see how such an instinct would lower then subsequent populations instead of bolstering them. And on a side note, it sure seems like such an instinct is pretty repressed especially when one considers experiments where witnesses do nothing other than watch when a person is being victimized.

Of course, the second question one must ask is by what criteria does one measure whether ideas such as freedom and liberty are truly valuable at all? As I said above, wouldn't survival be better? If the primary driving force for the advancement of human beings is their evolutionary growth, then they must be able to survive and reproduce. That would means survivability would be the highest moral calling, not massive self-sacrifice for an abstract concept like liberty. But we place ideas like freedom, liberty, and self-sacrifice above survival. Why? Who says these should be valued more highly? Where did that idea come from and how does it integrate within a naturalist worldview?

The sacrifices of D-Day can teach us much. It provides a stark contrast between human beings as rational, moral beings, and all other animals, whose highest motivation is only to survive. It shows that humans are different in kind and not simply by degree. And it shows there are values that naturalism cannot explain. I for one thank God for those who provided that sacrifice, and it makes me more confident that there is a God to thank.