There is No Freedom without Religious Freedom 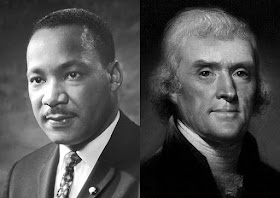 This weekend marked two important dates in the advancement of freedom. The more widely known was Martin Luther King, Jr. day, celebrated on the third Monday in January. MLK Day is a federal holiday in the United States, set aside to remember not just the work of Dr. King, but his cause.

To view another human being as less worthy or less capable for no other reason than the color of one's skin or heritage is wrong, for all human beings should hold an "equal station to which the Laws of Nature and of Nature's God entitle them" as Jefferson wrote in the Declaration of independence. MLK Day recognizes the concept enshrined in that document. Senator Jack Kemp, when voting for the holiday after rejecting it years prior, made the point well:


I have changed my position on this vote because I really think that the American Revolution will not be complete until we commemorate the civil rights revolution and guarantee those basic declarations of human rights for all Americans and remove those barriers that stand in the way of people being what they are meant to be.1

I think that's what makes MLK Day important. It makes Jefferson's belief that "all men are created equal, that they are endowed by their Creator with certain unalienable Rights" consistent for our nation. Jefferson's ownership of slaves may make some question his beliefs on this subject, but living inconsistently does not mean the idea itself is wrong; it only demonstrates the person who seeks to follow that idea is flawed.


The Other Holiday for Freedom

The other day that marks the advancement of freedom is less well-known, but no less important, and it also involves the writings of Thomas Jefferson and he felt this document was just as important as his crafting of the Declaration. That document is the Act for Establishing Religious Freedom, otherwise known as The Virginia Statute on Religious Liberty and it became one of the sources for the First Amendment in the U.S. Constitution and it was passed on January 16th of 1786. January 16th has come to be known as Religious Freedom Day.

In the statute, Jefferson lays out why the state should not be able to compel only certain opinions or religious views. It not only argues against elevating a certain denomination or sect (such as the Church of England, that had been recognized as the official church of the state of Virginia), but it argues that government impeding any religious beliefs is a violation of the natural rights of men. Jefferson argues that "to compel a man to furnish contributions of money for the propagation of opinions, which he disbelieves is sinful and tyrannical." He then points out "proscribing any citizen as unworthy the public confidence, by laying upon him an incapacity of being called to offices of trust and emolument, unless he profess or renounce this or that religious opinion, is depriving him injuriously of those privileges and advantages, to which, in common with his fellow citizens, he has a natural right" (emphasis added). 2

Jefferson finally argues that any civil official who wants to enforce his own understanding of what is allowable and what is not regarding religious questions actually robs all people of liberty:

But in cases of Christians who seek to both exercise their professions and uphold their religious convictions, that's exactly what we are seeing today. Civil magistrates are trying to override the beliefs of Christian cake bakers, photographers, and county clerks with whom the magistrates' opinions differ. Even the Obama administration hailed Religious Freedom Day as honoring "one of our most cherished ideas" even while it pursued legal action against a group of nuns who hold that abortion is morally wrong.


Dr. King had awakened something strong and true, a sense that true justice must be colorblind, and that among white and black Americans, as he put it, "Their destiny is tied up with our destiny, and their freedom is inextricably bound to our freedom; we cannot walk alone."4

The same relationship exists with religious freedom. If we lose the ability to speak about our faith when legislation is debated, we lose our voice of conviction. If we must be compelled to a certain action even though it stands in opposition to our understanding of right and wrong, we are being denied our natural rights. Natural rights cannot be taken from people by governments. Our country is founded on this principle. To compromise on religious freedom would mean subjecting ourselves to the tyranny of the powerful. That's a future that even Dr. King would loathe for his children.