William Bradford on the Spirit of Thanksgiving 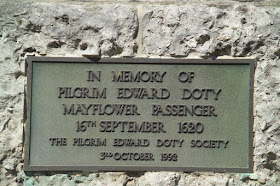 Thanksgiving is tomorrow and across the nation, people will be gathering and reflecting on the blessings they've had over the year. Such a tradition goes all the way back to the very first Pilgrims who had far less to be thankful for. William Bradford, the leader of the Plymouth Colony, wrote in his diary just how large the toll was upon the settlers at Plymouth. Reflecting on the hardships of that first year, he writes:


But here I cannot but stay and make a pause, and stand half amazed at this poor people's present condition; and so I think will the reader too, when he well considers the same. Being thus passed the vast ocean, and a sea of troubles before in their preparation (as may be remembered by that which went before), they had now no friends to welcome them, nor inns to entertain or refresh their weather-beaten bodies, no houses or much less towns to repair to, to seek for succor. It is recorded in scripture as a mercy to the apostle and his shipwrecked company, that the barbarians showed no small kindness in refreshing them, but these savage barbarians, when they met with them (as after will appear) were readier to fill their sides full of arrows then otherwise. And for the season it was winter, and they that know the winters of that country know them to be sharp and violent and subject to cruel and fierce storms, dangerous to travel to known places, much more to search an unknown coast. Besides, what could they see but a hideous and desolate wilderness, full of wild beasts and wild men? …

Let it also be considered what weak hopes of supply and succor they left behind them, that might bear up their minds in this sad condition and trials they were under; and they could not but be very small. It is true, indeed, the affections and love of their brethren at Leyden was cordial and entire towards them, but they had little power to help them, or themselves; and how the case stood between them and the merchants at their coming away, hath already been declared. What could now sustain them but the spirit of God and his grace?

May not and ought not the children of these fathers rightly say: "Our fathers were Englishmen which came over this great ocean, and were ready to perish in this wilderness; but they cried unto the Lord, and he heard their voice, and looked on their adversity, etc. Let them therefore praise the Lord, because he is good, and his mercies endure forever. Yea, let them which have been redeemed of the Lord, show how he hath delivered them from the hand of the oppressor. When they wandered in the desert wilderness out of the way, and found no city to dwell in, both hungry, and thirsty, their soul was overwhelmed in them. Let them confess before the Lord his loving kindness, and his wonderful works before the sons of men.1

Of the 102 passengers that boarded the Mayflower for the new world, 51 died prior to that first Thanksgiving. 2 There were only seven dwellings erected the first year3, meaning the Pilgrims dug graves at seven times the rate as they built houses, yet they give thanks to God for "his loving kindness, and his wonderful works before the sons of men." Something to remember as you give thanks.