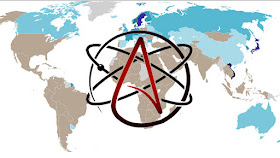 Within the last twenty four hours I saw two different versions of a meme gaining popularity online. The latest one references the nation of Iceland with text that states "Iceland has no army, jailed their corrupt bankers, economy is booming, violent crime is rare, one of the lowest crime rates in the world." The meme then unveils its punchline: "Atheist majority population. Where is all that evil and depravity the religious talk about?"

Similar ideas have been offered before. Phil Zuckerman has written in this vein extensively. His article "Secular Societies Fare Better Than Religious Societies" that appeared last year in Psychology Today makes similar assertions:


…those democratic nations today that are the most secular, such as Scandinavia, Japan, Australia, the Netherlands, etc., are faring much better on nearly every single indicator of well-being imaginable than the most religious nations on earth today, such as Colombia, Jamaica, El Salvador, Yemen, Malawi, Pakistan, the Philippines, etc.1

Is this right? Are nations such as Iceland, the Scandinavian countries, and Australia better off with their secular cultures?


Clarifying the Question – What Do you Mean by 'Better'?

Before we jump too far into the details, it is important to clarify just what is being claimed. Take the Iceland meme for example. Does anyone think it would be better if the United States had no standing army? I'm certain Iceland wouldn't like that, since as a member of NATO they rely on the U.S. and its NATO partners to protect them in the event of an invasion, as they did in World War II.2

Secondly, many of the measures that folks like Zuckerman uses are subjective on what makes a better state of affairs. For example, in her response to Zuckerman's book Society Without God, sociologist Lisa Graham McMinn notes how selective Zuckerman's definition of better is. She writes:


But Zuckerman flubs a fundamental point: He confuses a contented life with a good life. Zuckerman frankly admits the lack of purpose expressed by many Scandinavians. They aren't troubled by the need to find it either, but are satisfied living their lives without being overly concerned about the larger meaning of life or what happens after death.3

Interestingly, even Zuckerman admits in his own research that the one factor where the more secular nations fare worse is the number of suicides as a percentage of the population. In a paper presented in the academic journal Sociology Compass, Zuckerman writes:


As for suicide, however, regular church-attending Americans clearly have lower rates than non-attenders (Comstock and Partridge, 1972; Stack and Wasserman, 1992; Martin, 1984), although this correlation has actually not been found in other nations (Stack, 1991). Of the current top-ten nations with the highest rates of suicide, most are relatively secular (World Health Organization, 2003). 4

Does Being Liberal Mean More Moral?

Zuckerman immediately tries to brush off this correlation by explaining that perhaps most of the suicides are remnants from previous dictators in eastern bloc countries. However, he also notes in the report that the secular nations are much more supportive of physician-assisted suicide, which he argues is one factor in concluding that such stances make the secularist more moral than the believer:

But I would go farther. I would argue that a strong case could be made that atheists and secular people actually possesses a stronger or more ethical sense of social justice than their religious peers. After all, when it comes to such issues as the governmental use of torture or the death penalty, we see that atheists and secular people are far more merciful and humane. When it comes to protecting the environment, women's rights, and gay rights, the non-religious again distinguish themselves as being the most supportive5 (emphasis in the original).

So, is it of any surprise to see suicide rates go up in a culture where practices like abortion and euthanasia are lauded? Isn't this devaluing of life exactly what Christians mean when they warn that "things will get ugly"? In the Netherlands, there has been a 300% increase in euthanized people in just over a decade. Worse, as Wesley J. Smith reports, "In only twenty three years, Dutch doctors have gone from being permitted to kill the terminally ill who ask for it, to killing the chronically ill who ask for it, to killing newborn babies in their cribs because they have birth defects, even though by definition they cannot ask for it. Dutch doctors also engage in involuntary euthanasia without significant legal consequence, even though such activity is officially prohibited."6

That doesn't sound better to me. I think McMinn is right when she concludes "Zuckerman sells humanity short. If people are content but no longer care about transcendent meaning and purpose or life beyond death, that's not a sign of greatness but tragic forgetfulness."7