Why Claiming “Belief is a Psychological Crutch” Backfires 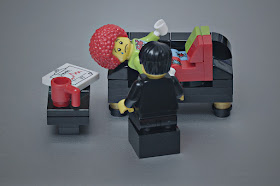 I just had the opportunity to listen to a recent Unbelievable? podcast where Christian biologist Zachary Ardern squared off against Peter Atkins, debating the topic "The Case from Science For & Against God." Atkins is an avowed atheist and is steeped in philosophical naturalism and scientism. He even said near the end of the interview (about 55:35 and following) that science is really the only way to discover truth and if one isn't leveraging science as the ultimate arbitrar of truth people are "not fulfilling their human capability."1 I guess that means we should shutter all the humanities departments at the colleges as a huge waste of money!

Given Atkins' full-blown scientism, it should be no surprise that he repeatedly decried any appeal to an immaterial cause for the order and design we see in the universe as "intellectually lazy." Arden tried to challenge Atkins on this point by explaining that scientist routinely distinguish between personal and mechanistic explanations every day (such as by forensic scientists). He then extended that to say an immaterial mind could provide better explanatory power than a purely mechanistic account of how the universe came to be.


The Mind as a Physical Process

Atkins objected to even the idea of an immaterial mind as "gobbledygook." He then replied, "We know what mind is. We know that mind is the outcome of the functioning of the brain. We know that the brain is a conglomeration of interacting cells. We know that those cells work upon physical/chemical principles. So, to say that there is a kind of ‘super-mind' out there, disembodied, that can effectively do what it wants and create the material universe, I think, that's just fantasy."

Arden objected to Adkins characterization. "I think it's very fair to us that there is a distinction between personal explanations and mechanistic explanations."

Atkins quickly shot back: "Well, I agree with that, but I think to understand the personal explanation, you put your subject onto the psychiatrist's couch and you explore how they come to those… that kind of understanding."

At this response, host Justin Brierley sought Atkins to clarify that he believes all minds basically reduce down to the chemical processes that happen in the brain, and Atkins gave a non-equivocal response of "Yes, absolutely!"


What's supposed to happen on the couch?

I want to take up Atkins appeal to the psychiatrist's couch. Atkins seems to hold one who believes in God is mentally deficient. He described it as "the lazy way of answering the big questions" and derided theism throughout the interview. So, Atkins claims anyone who settles on the answers to the origin of the universe by positing an immaterial mind should undergo psychiatric evaluation to uncover the false basis for their belief.

The charges that believers are mentally deficient and rely on mental fantasies have been around since Freud began making them himself.2 But here's the question I would pose to Atkins and other materialists: What is supposed to happen on that couch? Certainly Freud, who was also a materialist, believed that through psychoanalysis a person could change their beliefs. But what is this thing that's doing the changing? If our beliefs are ultimately a product of those physical/chemical reactions, then how can a person will to change anything? Further, how can person A declare person B's physical/chemical processes in the brain as defective if it's simply person A's physical/chemical processes that brought him to that conclusion?

You can quickly see the problem. If Atkins (and Freud) really believes that the mind is an outproduct of mechanistic laws and chemical reactions, there is no way to know if Arden's or Atkin's processes are those that are functioning correctly. Given the sheer number of theists versus atheists, one may conclude that it is Atkins that needs to seek the couch. But further, the assumption that theists are deluded and they can somehow become undeluded by working through their problems and talking about their feelings makes no sense, either. Certainly we can now change brain chemistry through drugs, but is that what Atkins and other materialists are really proposing? For any action or belief another person does that you don't like, give him drugs to change his brain chemistry. How rational is that?

Peter Atkins has a problem with his understanding of what a mind is. His appearance on Unbelievable? and engagement with Zachary Arden shows he wishes to change minds by making his case. But that very act contradicts his fundamental understanding of what the mind is and how it functions. By appealing to the psychiatrist's couch, Atkins denies the very materialism he claims. To me, holding on to two such disparate viewpoints is, well, crazy.