If You Want to be Reasonable, Then You May Have to Believe 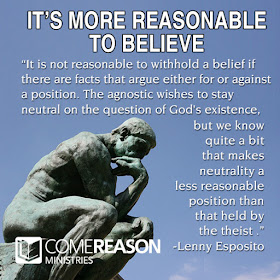 I've had the opportunity to interact with many people who would classify themselves as either atheists or agnostics. (Sometimes, they try to classify themselves as both, but that's an untenable position. ) While theists and atheists will argue back and forth on the legitimacy and support for each one's position, it is the agnostic position that intrigues me the most. Many agnostics claim to be reasonable people who rely on evidence and rationality to come to a conclusion about God. But is the person who withholds a belief always more reasonable than one who accepts it? In a word, no.


To Hold a Justified Belief

The Stanford Encyclopedia of Philosophy identified Roderick Chisholm as "one of the most creative, productive, and influential American philosophers of the 20th Century."1 Chisholm studied an area of philosophy devoted to understanding how we know things, called epistemology. His book A Theory of Knowledge provides a strong framework for what constitutes a rational belief. There, Chisholm explains that to have not simply a belief (which anyone can hold about anything—reasonable or not), but to have a justified belief is to "say something about the reasonableness of that belief." 2 Chisholm goes on to explain that when we make statements like "one who believes in X is at least as justified as one who withholds belief in X" we are making a claim that each position is equally reasonable; that is there is just as much reason to withhold that particular belief as there is to affirm that belief.

However, Chisholm makes the point that if arguments or evidence are presented that argue for a particular belief, the equation changes. To withhold a belief is to be neutral, not to take sides either way. For example, I'm completely neutral as to whether I think the Philadelphia Phillies will be playing in the World Series. I do not follow baseball closely and I don't know the standings of the teams. But after I look at the standings, even for a moment, I would no longer be neutral. Given the Phillies are last in their division and have a record of 47 wins versus 73 loses, it would be unreasonable for me to remain neutral on this question. Knowing the standings doesn't give me certainty about my belief, but I'm more justified in holding to the belief that the Phillies won't make it to the World Series.

Chisholm argues in a similar way when he writes that "St. Augustine suggests that, even though there may be ground to question the reliability of the senses, most of us are more justified most of the time believing that we can rely upon them than believing that we can not rely upon them" (emphasis in the original).3 Because there is good evidence that our sense tell us the truth about the world most of the time, it is more reasonable to believe what our senses tell us rather than doubt that they are providing truthful information. If additional evidence is offered (i.e. the person is having an extraordinary sensory experience and has taken a hallucinogenic) then we can adjust the justification to that additional information and say one may be more justified to not believe their senses in that instance. However, neutrality, what Chisholm calls counterbalanced, is a difficult position to maintain.


Can Agnostics Be Counterbalanced?

Given the fact that arguments and evidence changes the equation of belief, I must question those who claim to be agnostic on their position. It is not reasonable to withhold a belief if there are facts that argue either for or against a position. The agnostic wishes to stay neutral on the question of God's existence, but we know quite a bit that makes neutrality a less reasonable position than that held by the theist. We know that something doesn't appear from nothing. We know that consciousness has never materialized from non-conscious material. We know that at least some people have reported seeing miracles and we know that includes the reporting of seeing the resurrected Jesus. All these facts point to the existence of a God. If one were to argue against these as evidence for God's existence, then the burden would be upon that person to show why their approach isn't assuming atheism rather than agnosticism. But to simply claim to withhold belief given the facts above is simply not justified. It is what Chisholm would call unreasonable.