Why Christian Opposition to Obergefell is Not Pushing a Theocracy 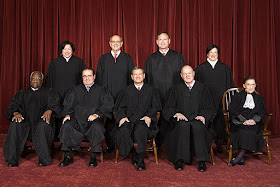 Last Friday's Supreme Court decision that forced all fifty states to recognize same sex unions as legal marriage continues to ripple through our culture. So many people on all sides of the issue are confused about just how far the decision impacts them, their faith, and their lives.

My friend Mike Licona reposted a question concerning how the Supreme Court's ruling affects Christians and why we are so upset. He recounts:


Chris Armer commented on my earlier post. He asked whether I believe a Christian might be able to look at the issue of same sex marriage in a manner similar to religious liberty; that a Christian could be against the act but for the freedom to do that act. For example, one might disagree with Islam but support a Muslim's right to worship freely in the U.S.1

I also saw a meme circulating on the Internet that asks, "You're upset because you want your religious laws to be the law of the land. Do you know who else wants that? ISIS." Are these charges fair? I don't think so. While it is true that my religious belief informs my opposition to Obergefell, it is not the only factor involved. In fact, I think there are at least three separate but interrelated offenses that the Obergefell decision violated and it's important to understand the distinctions between them.

The Obergefell decision offends Christians because of their theological understanding of marriage. Marriage is described in the Bible as the joining of a man and a woman where "they two shall become one flesh" (Matt 19:5, Gen. 2:24). Such a phrase denotes a physical joining of two people together—in other words sexual relations. Biblical marriage is conjugal; and of everything is working as intended, the two will literally become one flesh in producing a child.

Because homosexual sexual relationships are forbidden in the Bible, Christians see the Obergefell decision as antithetical to biblical values. They are right in this. The objection above, though, holds in this instance. There are many other human acts that are not illegal but are anti-biblical. Take the ever more common occurrence of two people living together out of wedlock. Should the government outlaw these relationships, too? Of course not. We are, as Licona rightly noted, not a theocracy and Christianity has never been about coerced morality.

Still, Christians are part of the governmental authority and from this position alone they have a right to keep immoral actions from becoming sanctioned. Christians have every right to protest and try to vote down laws making recreational use of marijuana legal, for example. The United States is a government of the people, by the people, and for the people, thus Christian views should count as part of that process. This is not a push of theocracy; it is giving a voice to a significant portion of the U.S. constituency. It is the outworking of a representative democracy. The ISIS comparison fails in this respect.

However, my complaint against Obergefell is not simply theological. There are at least two other spheres the decision affected, and those are important to recognize as well.

While Christians are not trying to impose a theocracy upon the nation, they are also upset because the decision really violates the established process of representative government we agreed to in both the Declaration of Independence and the Constitution. The dissenting Justices clearly saw this decision as a Constitutional tragedy. Chief Justice Roberts wrote:


Many people will rejoice at this decision, and I begrudge none their celebration. But for those who believe in a government of laws, not of men, the majority's approach is deeply disheartening. ... Five lawyers have closed the debate and enacted their own vision of marriage as a matter of constitutional law. Stealing this issue from the people will for many cast a cloud over same-sex marriage, making a dramatic social change that much more difficult to accept.

If you are among the many Americans &mdash; of whatever sexual orientation &mdash; who favor expanding same-sex marriage, by all means celebrate today's decision. Celebrate the achievement of a desired goal. Celebrate the opportunity for a new expression of commitment to a partner. Celebrate the availability of new benefits. But do not celebrate the Constitution. It had nothing to do with it.2


The Court's decision today is at odds not only with the Constitution, but with the principles upon which our Nation was built. Since well before 1787, liberty has been understood as freedom from government action, not entitlement to government benefits. The Framers created our Constitution to preserve that understanding of liberty. Yet the majority invokes our Constitution in the name of a 'liberty' that the Framers would not have recognized, to the detriment of the liberty they sought to protect.3

Alito and Scalia spoke in similarly harsh terms. It is a fact that when the question of defining marriage was put to a vote, natural marriage was winning handily. Thirty of the fifty states passed Constitutional amendments reserving marriage to one man and one woman by an average margin of 68%.4 Only the state of Minnesota's vote in 2012 failed to gain a majority of the votes required to pass the amendment. In most of these states, the vote was struck down by judges, usurping the will of the electorate.

Of course it is not always true that the majority has a correct view of the rights of others. The history of slavery in our country shows this. However, it is also not true that Supreme Court decisions are always a corrective as the Dred Scott, Buck v. Bell, and Roe v. Wade decisions also show. Righteous indignation at a court that decides a case because of personal ideology instead of the limited power the Constitution affords the Federal government should be applauded.

As Scalia commented, "Today's decree says that my Ruler, and the Ruler of 320 million Americans coast-to-coast, is a majority of the nine lawyers on the Supreme Court."5 The United States was never to be an Oligarchy. Christians, who were winning democratically in the majority of states, had their voice and the opportunity of democracy stripped from them through judiciary fiat.

Lastly, and perhaps most importantly, the Obergefell decision is wrong because it violates the basis of marriage that may be found in natural law itself. Natural Law has been recognized as the foundation of our entire system of government since Jefferson penned his famous words in the Declaration of Independence. Just as one can look to the nature of human beings to know all are of equal worth, so one may look to nature to understand that marriage transcends government sanction. Marriage has a biological component of producing children and this makes the institution different than either societal creations or societal conventions.6

Our government may not be a theocracy, but it must recognize natural law to be considered just. Marriage is the only institution in human history that has been recognized as the proper institution for producing and rearing children. We do not allow children to be produced in government hatcheries. We do not encourage parents to abandon their children to government agencies. We encourage children to be brought up in stable homes and we expect biological parents to shoulder the responsibility of rearing their children. That's what deadbeat dad laws are all about.

Nature dictates that every child has a biological mother and a biological father. Every. Single. One. Because of this, there is a responsibility the parents bear when creating a new life. Codifying homosexual unions either denies the child's right to a legally recognized mother and father or it separates the child from the parents completely, assuming biology has no bearing at all on what constitutes a parent.

The Obergefell decision degrades marriage by diminishing it from its recognized role across societies as the primary institution for creating and rearing children. It purposely cleaves the procreative aspect of marriage since there is no way any homosexual union could ever produce a child. This is a clear and compelling difference between natural marriage and homosexual unions. The nature of the two unions is different. As Francis J. Beckwith explains:


The argument against same-sex marriage is based on the nature of human persons as gendered beings who have a purpose that is derived from that nature. That is to say, male-gendered human persons are meant for coupling with female-gendered human persons, even if their coupling does not result in procreation. This argument is not based on a human person's current function, ability, or desire, each of which could be inconsistent with how human persons ought to be by nature. For example, a person who is blind is lacking something physically, though he or she is still a human person who by nature ought to be seeing. In the same way, a sterile, aged, or willingly childless person is still a gendered human person whose purpose for marital union (if he or she does not have the gift of celibacy) can be consummated only by one-flesh communion with someone of the opposite gender. This remains true even if he or she has desires that are contrary to what he or she ought to desire by nature.7

Martin Luther King, in his famous "Letter from the Birmingham Jail" explained the difference between a just and an unjust law:

If the Obergefell decision shows that it is neither rooted in eternal law nor natural law, then it should be opposed on grounds that the law has no basis for being just. Christians can dismiss the charge we are trying to establish a theocracy as unfounded. The grievance against this decision is grounded in a more fundamental premise than that.