Os Guinness Says "We Are All Apologists Now"

I recently received an advanced copy of Os Guinness' forthcoming book Fool's Talk: Recovering the Art of Christian Persuasion. While I haven't yet read the whole thing, Guinness is a solid scholar and a stalwart author who takes both cultural engagement and the defense of the faith seriously.

In this contribution, Guinness doesn't offer another catalog of answers so much as he offers keen insight into the method of communication Christians need to develop in order to be heard in our increasingly noisy society. I'll review the entire book at a later date. For now, I'll leave you with the opening lines of the introduction, which should whet your appetite for more. 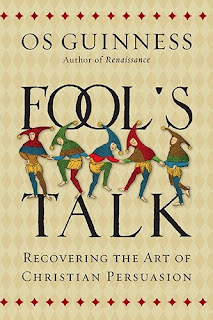 We are all apologists now, and we stand at the dawn of the grand age of human apologetics, or so some are saying because our wired world and our global era are a time when expressing, presenting, sharing, defending and selling ourselves have become a staple of everyday life for countless millions of people around the world, both Christians and others. The age of the Internet, it is said, is the age of the self and the selfie. The world is full of people full of themselves. In such an age, "I post, therefore I am."

To put the point more plainly, human interconnectedness in the global era has been raised to a truly global level, with unprecedented speed and on an unprecedented scale. Everyone is now everywhere, and everyone can communicate with everyone else from anywhere and at any time, instantly and cheaply. Communication through the social media in the age of email, text messages, cell phones, tweets and Skype is no longer from "the few to the many" as in the age of the book, the newspaper and television, but from "the many to the many" and all the time.

One of the effects of this level of globalization is plain. Active and inter­active communication is the order of the day. From the shortest texts and tweets to the humblest website, to the angriest blog, to the most visited social networks, the daily communications of the wired world attest that everyone is now in the business of relentless self-promotion—presenting them­selves, explaining themselves, defending themselves, selling themselves or sharing their inner thoughts and emotions as never before in human history. That is why it can be said that we are in the grand secular age of apologetics.

The whole world has taken up apologetics without ever using or knowing the idea as Christians understand it. We are all apologists now, if only on behalf of "the Daily Me" or "the Tweeted Update" that we post for our virtual friends and our cyber community. The great goals of life, we are told, are to gain the widest possible public attention and to reach as many people in the world with our products-and always, our leading product is Us.1

I completely agree with this passage. Everyone seek self-promotion these days, sometimes in ways that are more subtle than others. People feign expertise in subjects they really know nothing about, appearing smarter than they are. The advent of the Google scholar, where people believe the first three hits from a search term are enough to make one knowledgeable about a subject has the effect of chilling conversation and therefore chilling the true accumulation of knowledge. Therefore, Christians do need to be wise as serpents but gentle as doves in their interaction with others. Fool's Talk would be a good start.

The book will be released July of 2015. You can pre-order on Amazon here.