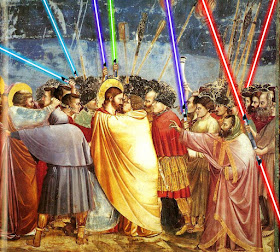 Yesterday, I began to discuss the so-called Lost Gospels, those second and third century writings claiming to be Gospel accounts by Apostles like Peter, Thomas, and Judas. As I noted, the Apostles names applied to these writing are clearly forged. The writings themselves are too late to come from those living at the same time Jesus ministered, unlike the four recognized Gospels of the New Testament. However, that doesn't stop some skeptics from trying to promote the idea that these documents are somehow on par with the canonical Gospels.

In his book Lost Christianities, Bart Ehrman makes the claim that there was some kind of competition between the four Gospels we know and these other writings. He states:


The Gospels that came to be included in the New Testament were all written anonymously; only at a later time were they called by the names of their reputed authors, Matthew, Mark, Luke, and John. But at about the time these names were being associated with the Gospels, other Gospel books were becoming available, sacred texts that were read and revered by different Christian groups throughout the world: a Gospel, for example, claiming to be written by Jesus' closest disciple, Simon Peter; another by his apostle Philip; a Gospel allegedly written by Jesus' female disciple, Mary Magdalene; another by his own twin brother, Didymus Judas Thomas.1

Ehrman then claims "Someone decided that four of these early Gospels, and no others, should be accepted as part of the canon," and then asks "How can we be sure they were right?"2


Obfuscating the Late Composition of the Gnostic Texts

As a New Testament scholar, Ehrman is being extremely disingenuous here. First, notice the phrasing of the sentence "about the time these names were being associated with the Gospels, other Gospel books were becoming available." It is written tom mislead readers that the Gnostic accounts are nearly contemporaneous with the Gospels. That isn't true. The Gospels were well known and circulated from the first century onward. As I've shown here and here, early church fathers named the authors of all four of the Gospels by 100 AD and no other candidates were ever seriously advanced. The Gnostic texts weren't even written until the second and third centuries, and that's when the church began making lists of what counts as Scripture and what doesn't. Thus, when Ehrman claims that "other Gospel books were becoming available," he means other Gospel books were being written. And when he claims this happened "about the same time these names were being associated with the Gospels" he means the Church put down on paper a list of Gospels bearing the names Matthew. Mark, Luke, and John.

But what of Ehrman's other claim that these texts were considered sacred, revered and worthy to be considered as part of the Christian Scripture? Internet skeptics make similar assertions all the time. However, these Gnostic texts, although labeled by their forgers as "Gospels" don't hold a candle to the real Gospels. In fact, all it takes is a quick read of them to show they are about as similar to the Gospels as a pulp science fiction novel is to one of Shakespeare's plays. Let's take a look at a few snippets to get a flavor.

Ehrman points to the Gospel of Peter as a potential candidate for Scripture. Yet, in the Gospel of Peter, Pontius Pilate becomes free of all guilt because he washed his hands, thus flipping John's account on its head. It was the unwashed Jews and Herod that are supposed to take the blame for Jesus's death:


But of the Jews no man washed his hands, neither did Herod nor any one of his judges: and whereas they would not wash, Pilate rose up. And then Herod the king commanded that the Lord should be taken into their hands, saying unto them: All that I commanded you to do unto him, do ye.3


Such a re-envisioning of Herod's washing as a good thing is remarkable enough, but what's worse is how the account of the resurrection portrays Jesus coming out of the tomb on Sunday morning accompanied by two angels. All three of them have elongated necks and there a floating cross that answers God the Father! The passage reads:


They saw again three men come out of the sepulchre, and two of them sustaining the other and a cross following, after them. And of the two they saw that their heads reached unto heaven, but of him that was led by them that it overpassed the heavens. And they heard a voice out of the heavens saying: Hast thou (or Thou hast) preached unto them that sleep? And an answer was heard from the cross, saying: Yea.4


Certainly, the Gospel of Peter does not hold the same historical weight as the Gospel accounts.

The Gospel of Thomas was another account that Ehrman mentions. This text is interesting because it is probably the earliest of the Gnostic texts written sometime in the early or middle second century. But to call it a Gospel is to malign the term. First of all, it isn't a narrative of Jesus' ministry. It is only 114 verses long and is a collection of supposed sayings or teachings of Jesus. About a third of these are copied from the existing Gospel accounts. About a third are teachings not necessarily incompatible with Christian doctrine, but we don't know if Jesus said them. The last third, though, are completely Gnostic.

For example, take verse 22, which is comprised of double-speak :

Or verse 30, which is not only confusing but seems to reject monotheism:

Finally, Thomas ends with a disturbing bit of Gnostic ideology where Jesus states only men can get into heaven and Mary Magdalene must be turned into a man to enter the Kingdom:


Simon Peter said to him, "Let Mary leave us, for women are not worthy of life." Jesus said, "I myself shall lead her in order to make her male, so that she too may become a living spirit resembling you males. For every woman who will make herself male will enter the kingdom of heaven.7

I could go on, but I think my point is made. The so-called Lost Gospels are nothing of the kind. They weren't lost, they were rejected. And they weren't Gospels, because they are devoid of the Good News of salvation. Of course, people can spiritualize anything; that's why a significant number of people in England and Wales identified themselves as holding to the Jedi faith.8 Holding that the Gnostic texts were serious candidates as Gospels falls into the same category as believing Obi-Wan Kenobi is a religious scholar. It makes me wonder in what way Dr. Ehrman watches Star Wars.