Does the Story of the Resurrection Have a Flaw? 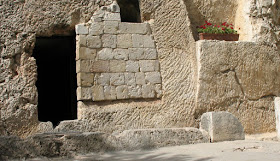 
I had never heard of this until today: How many Christians are aware that Jesus' grave was unguarded AND unsecured the entire first night after his crucifixion??? Isn't that a huge hole in the Christian explanation for the empty tomb?? Notice in this quote from Matthew chapter 27 below that the Pharisees do not ask Pilate for guards to guard the tomb until the next day after Jesus' crucifixion, and, even though Joseph of Arimethea had rolled a great stone in front of the tomb's door, he had not SEALED it shut!

Anyone could have stolen the body during those 12 hours!

The empty tomb "evidence" for the supernatural reanimation/resurrection of Jesus by Yahweh has a HUGE hole in it!

He then quotes Matthew 27:57-65, where we find the following relevant portion:


The next day, that is, after the day of Preparation, the chief priests and the Pharisees gathered before Pilate and said, "Sir, we remember what that impostor said while he was still alive, ‘After three days I will rise again.' Therefore command the tomb to be made secure until the third day; otherwise his disciples may go and steal him away, and tell the people, ‘He has been raised from the dead,' and the last deception would be worse than the first." Pilate said to them, "You have a guard of soldiers; go, make it as secure as you can." So they went with the guard and made the tomb secure by sealing the stone."

Matthew thus lays out the timeline that Jesus died on the Day of Preparation (that is, the day before the Sabbath). We would understand this as Good Friday. Then, the Jewish leadership went to Pilate and asked that Jesus's tomb be guarded given the claim that he would rise again. Pilate acquiesces, and a guard is dispatched. The commenter then asks:

The empty tomb is NOT good evidence for the resurrection claim. The most plausible explanation, based on the Bible itself, is that someone stole or moved the body!

Objections like these are interesting because on the surface they sound plausible. However, many times we bring our own assumptions into such a reading without realizing it. I think this is what has happened here.

First, it's important to realize that the source of this exchange is Matthew's Gospel. Matthew is the most Jewish of the four gospel accounts and his account of the time of Jesus's crucifixion (Matt. 27:45) reflect the Jewish rather than Roman accounting of time. It is well known that for Jews a new day begins at sundown. This means the term "the next day" doesn't imply a minimum of twelve to twenty-four hours later. In fact, we know that Jesus was buried very close to sundown because the women didn't have enough time to properly prepare his body, which is why they were going back to the tomb on Sunday morning. It's also why Pilate had the legs of the others condemned broken; it would speed their death so they could also be dealt with before the onset of the Sabbath.

Secondly, we know that the Jewish leadership was familiar with Jesus's claim to resurrect in three days, and were so deeply concerned about some manipulation to that end that they approached Pilate on the Sabbath to ask for a guard. Pilate allows them to use their own temple guards to secure the tomb.1 But this would happen rather quickly. The crucifixion is a public event and we know the priests were watching Jesus die. Since Jesus's prediction of resurrection came well before his crucifixion, it must've been on their minds. Why would they have waited until the next morning or afternoon? Haste is necessary to effectively stop any tomb raiding by disciples.


Wouldn't the Guards Have Checked?

Thirdly, we have to think about the charge given to the guard. Are they to simply guard the tomb from that point forward no matter in what condition it currently is found? The guards are dispatched with this very crucial task that is of such concern that it unites the chief priests and the Pharisees in a common goal. They get to the tomb and they must see it in one of two conditions. Either the stone has been sealed over the tomb or the tomb is open. If the stone has been placed over the tomb, then they guard that configuration. But, we read later that the women (who were concerned about moving the stone) found it rolled away on Sunday morning. Who did that? Why would the guard even allow that to happen?

The second choice is the stone wasn't sealed but the guards sealed it there. Two questions now surface, did the guards bother to look inside the open tomb to make sure that the body was still in there? If the challenge is to keep people for stealing the body, don't you check to make sure the body is still there? If you don't and seal the tomb anyway, the question still remains why did the guards allow someone else to come up and open the tomb at all? Isn't your assignment to not let that happen?

No matter what amount of time transpired between Jesus's death and the guards arriving at the tomb, the question of who moved the stone becomes the undoing of the "disciples stole the body" claim. As Craig Keener notes, "Those who have ever had their beliefs or deep hopes shattered will recognize that Jesus' death should have disillusioned the disciples too much for them to fake a resurrection (which would also be inconsistent if they expected one.) Though the corpse remaining in the tomb would have easily publicly refuted the resurrection claim, had the authorities been able to produce it, an empty tomb in itself would not be self-explanatory."2 IN other words, only in the context of the resurrection does the empty tomb have evidentiary power. Yet, the fact that the tomb was empty is proven by the story, as N.T. Wright notes "The point is that this sort of story could only have any point at all in a community where the empty tomb was an absolute and unquestionable datum." 3

Lastly, the stolen body cannot explain the conversion of Saul of Tarsus, who believed the chief priests and sought to exterminate what he considered a blasphemous threat to his beliefs.

So the "hole" in the resurrection story turns out to be evidence for the resurrection itself. Without an open tomb, one cannot claim an empty tomb. But since the tomb as found empty, which is common knowledge as N.T. Wright notes, then it lends credence to the resurrection account.

1. Many have assumed the Jews were asking for a Roman guard, but I think that isn't correct. The fact that the guards don't report back to Pilate, but to the chief priests indicate they were under the Sanhedrin's control. Further, when Roman guards allowed prisons to be violated, such as in Acts 16:27-28, he knew the penalty would be a cruel death and would rather have taken his own life. It makes more sense to read Pilate as saying "You have guards of your own; you can use them to make the tomb secure."
2. Keener, Craig S. The Historical Jesus of the Gospels. Grand Rapids, MI: William B. Eerdmans Pub., 2009. Print.342.
3. Wright, N. T. The Resurrection of the Son of God. Minneapolis, MN: Fortress Press, 2003. Print. 638.