The Blow-Hard Bias of Inherit the Wind 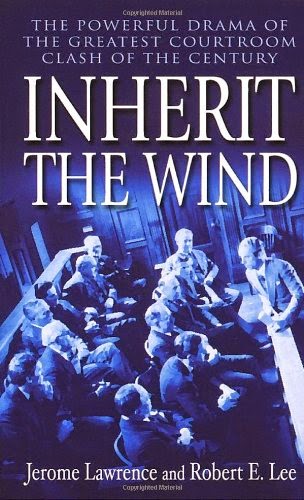 The plea came in from a girl who was taking a required undergrad English course where the professor assigned an analysis of the 1955 play Inherit the Wind, which presents a fictionalized account of the famous Scopes "Monkey" Trial held in Tennessee thirty years earlier. For those of you that don't know, substitute teacher John Scopes was put on trial for violating Tennessee's Butler Act, a law prohibiting any state-funded school from teaching that "man has descended from a lower order of animals."1


Inherit the Wind – Not History

The play (and the subsequent 1960 movie with Spencer Tracy) proved immensely popular at the time. However, there are some real problems with the events in the way the play presents them. While the broad points are the same, the play changes so many details that the authors acknowledged their play isn't history. In the play's preface they wrote:


Inherit the Wind is not history. The events which took place in Dayton, Tennessee, during the scorching July of 1925 are clearly the genesis of this play. It has, however, an exodus entirely its own.

Only a handful of phrases have been taken from the actual transcript of the famous Scopes Trial. Some of the characters of the play are related to the colorful figures in that battle of giants; but they have life and language of their own - and, therefore, names of their own.2

While this disclaimer may help, I don't think it makes things clear enough. Most people don't realize just how slanted and biased the caricatures are in the play when one compares it to the real-life events. Therefore, I would like to take a bit of time to explore some of the misconceptions that usually occur when the play or movie is viewed.


Inherit the Wind – How the Bias Shows

In both the play and the film, Christianity and its proponents are nothing more than straw men that authors Jerome Lawrence and Robert E. Lee knock down with ease. Lawrence and Lee state, "Inherit the Wind does not pretend to be journalism. It is theatre. It is not 1925. The stage directions set the time as 'Not long ago.' It might have been yesterday. It could be tomorrow."3 Lawrence in an interview stated the motivation for writing the play wasn't religion versus evolution, but the intellectual stifling he saw in the anti-Communist movements of the 1940s and 1950s, ""We used the teaching of evolution as a parable, a metaphor for any kind of mind control. It's not about science versus religion. It's about the right to think."4 Yet, it's more than clear that Lawrence and Lee place those who hold to something other than an evolutionary account of human origins into the "mind control" camp. For example, take two characters Lawrence and Lee create who didn't exist in the actual trial, Reverend Brown and his daughter Rachel, who is engaged to the Scopes character, named Cates in the play. During the play, Rachel, explains "You see, I haven't really thought very much. I was always afraid of what I might think, so it seemed safer not to think at all" but then sees that she must change and begin to see things Cates's way.

In her very comprehensive article that takes down many of the foibles in the play, Carol Iannone observes "While Inherit the Wind remains faithful to the broad outlines of the historical events it portrays, it flagrantly distorts the details, and neither the fictionalized names nor the cover of artistic license can excuse what amounts to an ideologically motivated hoax."5

Other factual errors abound, and all of them are strategically created to make those who want the Butler Act upheld to look bad. Dr. Richard M. Cornelius, who is one of the foremost experts on the Scopes trial wrote the book William Jennings Bryan, The Scopes Trial, and Inherit the Wind. Below, he provides a quick overview of some of the pore egregious errors perpetrated by the play:


Here are some of the instances where Inherit the Wind differs from the historical facts of the trial record and the events surrounding it. (For convenience, the names of the historical characters which the play supposedly involves are used.)6

Tomorrow, I will explore the background behind the original trial and show why it isn't the draconian groupthink it's portrayed to be.