Jesus Redeems Us from the Monsters

As we approach Easter Sunday, I think it's important for Christians to reflect on various aspects of our salvation. It's too easy to think of being saved as a promise for a happy life in heaven. There's so much more to the redemption than our happiness and I think we can appreciate Easter more fully if we thought a little harder on some of the less comfortable implications of salvation.


What It Means to Be Human

ISIS has been capturing headlines consistently in the news media and across social channels for nearly two years now. There's hardly a soul alive who doesn't know about the Islamic State's terror campaign across areas of the Middle East, with gruesome YouTube posts showing the savage beheadings of those they consider enemies, those of different faiths, or those with whom they simply disagree. The pillage of towns like Mosul where ISIS warriors brought back a version of the Nazi yellow badge to mark Christians and drove them from the place they called home for nearly 2,000 years. I think all sane people agree that those in ISIS demonstrate the worst in humanity. 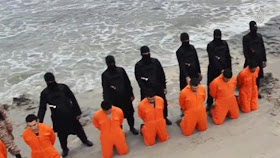 But, the ISIS terrorists are not the exception when one asks what it means to be human. Their actions are neither new nor novel when we survey the annals of history. In fact, as Dr. Clay Jones put it, labeling ISIS as "monsters" or "inhuman" is our attempt to separate them from ourselves and perhaps provide a bit of comfort to our consciences. Yet, as Jones states, "these horrors are precisely human. They indict all of humankind in a particular way."1 Every single one of us has the capacity to become ISIS-enabled, holocaust-enabled, or 9/11 enabled. Being human means being broken to the point of the monstrous.

This isn't just my view. Just survey the wars of history. Whether it's the burning or beheading of children as a sacrifice like the ancients did or the brutal rape and machete-hacking dismemberment of the victims in Sierra Leone's civil war, history is replete with the carnage that humans continually accomplish. In his article written for the tenth anniversary of the 9/11 attacks, Jones compiles statements from historians and psychologists as well as holocaust survivors like Elie Wesel who all say that evil is standard fare for humans. Even Aleksandr Solzhenitsyn, who was imprisoned and tortured in a Soviet Gulag confirmed this when he wrote:


Where did this wolf-tribe appear from among our people? Does it really stem from our own roots? Our own blood?

It is our own.

And just so we don't go around flaunting too proudly the white mantle of the just, let everyone ask himself: "If my life had turned out differently, might I myself not have become just such an executioner?"

It is a dreadful question if one answers it honestly.

The capacity for unspeakable evil lies within every beating heart.


We Need Redemption from Our Own Nature

In Christian theology, this idea is nothing new. When Paul was writing to Titus, he said the natural man was "detestable, disobedient, unfit for any good work" (Titus 1:16, ESV). Paul didn't even exclude himself from such a judgment, claiming "I know that nothing good dwells in me, that is, in my flesh" (Rom 7:18, ESV). As natural human beings, we are completely saturated with sin and rebellion, and there is no way for us to escape our own corruption.

While it is impossible for us to escape the corruption of sin that would make us monsters, it is possible for God himself to provide a way of escape. The sacrifice of Christ on the cross makes it possible for us to move from the evil darkness of our lost state to one where we can actually be something different. Just after he states that there is nothing good residing within his flesh, Paul writes:


God has done what the law, weakened by the flesh, could not do. By sending his own Son in the likeness of sinful flesh and for sin, he condemned sin in the flesh, 4 in order that the righteous requirement of the law might be fulfilled in us, who walk not according to the flesh but according to the Spirit. (Rom. 8:3-4, ESV)

This is why believers are told that they are "a new creation. The old has passed away; behold, the new has come" (2 Cor. 5:17, ESV). We are remade in the Spirit and we await the day when we will be remade in our bodies. We are not saved merely from hell. Monsters deserve hell and given that all human beings are monster-enabled. But Jesus does to redeem us from our evil nature. He provides for us a new nature and he provides a way of escape. That's something to be thankful for this Easter.