Dear Mr. President: Holding to Exclusive Belief is not Arrogant

Is it humble to say that no one should claim to have the truth? I've heard such assertions before. I've had discussions with others about religious beliefs and many of them have responded that to claim any kind of concept of God that excludes other beliefs systems is arrogant. But I think the opposite may actually be true. 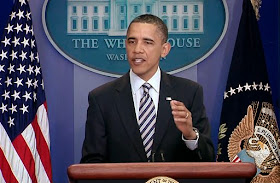 As an example, I would like to look at part of the speech Barack Obama made at the National Prayer Breakfast in Washington, D.C. While the president, unlike his predecessors, is the first to not hold any observances for the National Day of Prayer during his presidency, he has attended the prayer breakfast each year. The event is put on by The Fellowship Foundation, an organization that blurs all faiths and is described as "assertively non-doctrinal and non-ecclesiastical."1

It isn't surprising, then, that Obama's remarks would take on a non-committal tone. Yet, he made some statements that go beyond non-commitment. In admonishing the audience to "counteract intolerance," he advised:


I believe there are a few principles that can guide us, particularly those of us who profess to believe. And, first, we should start with some basic humility. I believe that the starting point of faith is some doubt—not being so full of yourself and so confident that you are right and that God speaks only to us, and doesn't speak to others, that God only cares about us and doesn't care about others, that somehow we alone are in possession of the truth.2

Searching For the True Truth

This is the kind of claim that sounds very good until you think about it a little more deeply. First, I agree with the president that God cares for all people. But where did he get such an idea? Certainly, it didn't come from the Eastern faiths like Buddhism or Hinduism. In these, the universe runs according to the law of karma. You must repay debts you acquired in a previous life. Karma is impersonal and always exacting; no one escapes it.

The Bible clearly teaches God cares for everyone. Verses like John 3:16 that read "For God so loved the world" and 2 Peter 3:9 that says the Lord is "not willing that any should perish"( ESV) enforce this point. Yet, the concluding portions of both those verses are very exclusive in nature. God so loved the world that he gave his son and it is whosoever that believes on him is saved. God doesn't want us to perish, but instead come to repentance. These are exclusive claims and you must accept them as true or as false, but you cannot do both.

You cannot pull the Christian teaching of God caring about all people out of the way he demonstrated that care—through Jesus' death—and say that you must then doubt that exclusive tent of the faith. It makes no sense. This is true of ANY faith system. All of them make truth claims about God, about the way the universe works, and about how an individual can find salvation. If you embrace a religion, then you are agreeing that its teachings are true and therefore any teaching that contradicts it is false.

Here's the thing. Those who claim that all faiths have some form of the truth are themselves making a faith claim they want you to accept as true. Leaving aside the contradictory nature of the various belief systems, the person making the statement is saying that believers in an exclusive faith have been duped, while he himself has come to a higher understanding.

I once saw a television show where an anthropologist came to live with a native tribe in the Amazon rain forest. Still using Stone Age tools and grass huts, he proclaimed glowingly how the tribe was "closer to the earth" and had so much less impact on their natural environment. The show showed that the chieftain would seek to cure children born with deformities or illness by sacrificing a chicken and leaving them exposed to the elements. Some would, of course, die. He then said something like, "We may feel that such acts are cruel. They're not, for the tribe cannot afford to take on the burden of caring for such offspring when they won't be able to help the tribe survive. It could be a death sentence for them. While their value on children may be different from our own, neither is wrong. Both are the way we survive in the tribes in which we're raised."

The anthropologist was saying that he is smarter than both the tribesmen in their belief that a chicken could cure their child AND in you, the person of the modern society who engages in your rituals because you were raised in them. The anthropologist is claiming to have some kind of privileged knowledge that stands above both points of view. However, if he were to be bitten by a poisonous snake or contract malaria in the jungle, do you think he would accept the sacrificed chicken as his only treatment? If his daughter were diagnosed with cancer, would he seek out the chieftain or would he look for the best oncologist he could find?

Belief systems make truth claims and truth by its very nature is exclusive. For the president to lecture us to "not be so full of yourself" to think that "somehow we alone are in possession of the truth" is disingenuous. He certainly seems to be very confident that he is right. I wonder how he reconciles that with his own advice.